Woman with leprosy learns to read and write

WILLS POINT, TEXAS (ANS, Jan. 9, 2019) — After a lifetime of rejection, Kaavya now feels loved and cared for in a literacy class held by GFA-supported Sisters of Compassion. The literacy class is held in the leprosy colony Kaavya calls home. 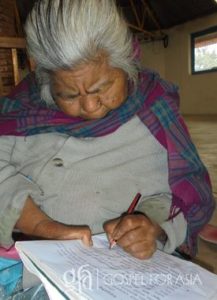 At 64 years old, learning to read and write was a dream come true for Kaavya. The double curse of leprosy and illiteracy had set her life on a path of rejection and loneliness.

Kaavya first felt the weight of this curse when, as a little girl, her father contracted leprosy—a curable disease that still carries a stigma in many developing countries where treatment is inaccessible to the poorer population. The pronouncement of “leprosy” branded her father, and the community ostracized her family—convinced the dreaded disease was a punishment for sin.

Already mourning her loss of community, Kaavya’s heart crumbled to pieces when her father passed away. While the emotional ache still throbbed, Kaavya experienced the physical strain of fever and pain in her extremities. Going to the hospital for these symptoms, Kaavya received the crushing news: She had leprosy too.

“It was the worst day and saddest day in my life,” Kaavya shared. “What to do? I could not die.”

Kaavya continued to struggle in life. She got a job at a hospital, but then, after 22 years, she was let go because she was an illiterate village lady, unqualified in the eyes of the current hospital staff. She then married and settled into family life. A few years into her marriage, however, she found out her husband had a previous family. He had only married her because his first wife bore eight girls, and he wanted Kaavya to bear him a son.

Finding Hope for the Future Through Literacy

After years of hardship, Kaavya came to live in a leprosy colony, making her home with those who experienced the same rejection she had. But in this community, she received acceptance and love in the form of GFA-supported Sisters of Compassion. They served the residents—including Kaavya—sharing God’s love and meeting practical needs. 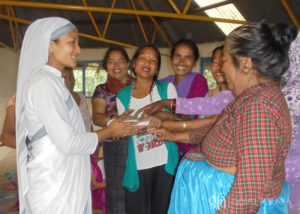 Kaavya (front, right) and several other women presented a gift to a Sister of Compassion.

Seeing the limitations of illiteracy holding back many in the community, the Sisters of Compassion committed to teaching them to read and write. Kaavya was eager to attend the classes, having personally experienced discrimination for being illiterate.

“When I joined the literacy class, I learned lots of things,” explains Kaavya. “I learned not only reading and writing; I learned good habits, roles of women, wife and mother in the family. Now I am very happy…I will not lose heart because I can read and write.”

The love and servanthood of the Sisters of Compassion was a healing balm to Kaavya.

“I am thankful to the sisters for teaching us,” she shares. “You opened our eyes. You taught us what actual life is.”

Kaavya rejoiced that she can now read the Bible. She knows that God has taken away the curse she lived under for so many years.

God is Perfect in All His Ways

Why Should I Suffer?