Top Posts
Colorado football coach Sanders’ unabashed faith
There’s A Light That Enters Houses With No...
Knowing the One Who Always Keeps His Word
Pregnancy Resource Centers Fight For Life Amidst Opposition
This World is Not Our Home
Lessons Learned From a Gingerbread House
Let There Be Peace on Earth
‘I Wanna Dance’ movie: Whitney Houston’s success and...
Fact Finding, Sight Seeing, and Prayer Walking
Kidney donation led to 8 life-saving surgeries
Home Tags Posts tagged with "Luis Palau Association"

BOGOTÁ, COLOMBIA (ANS – Aug. 25, 2018) — Fifty-two years after renowned evangelist Luis Palau’s first major campaign in Colombia’s capital city of Bogotá, the Palau Association returned to deliver the same message of the hope of the Gospel to a new generation of Colombians, with more than 200,000 in attendance and a worldwide reach or more than half-a-million on social media. 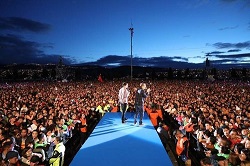 Standing in front of a sea of people in Bogotá’s iconic Parque el Tunal on the final night of the massive, city-wide campaign, evangelist Andrew Palau, son of Luis Palau, shared about the abundant life found only in Jesus and invited the crowd into a personal relationship with the Living God.

The August 19th night event was a fitting capstone to the historic campaign that united 852 churches and reached more than 200,000 people in person through multiple events in the city.

In the week leading up to the massive Sunday night festival, Palau and local leaders coordinated multiple outreaches, including gatherings for women, business and civic leaders, prisoners, and two additional festivals on Friday and Saturday nights, August 17 and 18, at Plaza de Bolívar, the same location as the original Luis Palau event in 1966.

“It was such a privilege to be standing in the same square where my father started so many years ago,” said Andrew Palau.

“To be sharing the same Good News Gospel, in the same city, among the same wonderful people – it’s a dream come true. I was born in Colombia, when my parents were missionaries here. I have a deep passion for the people of Colombia. I love this nation. And I pray all of Colombia would come to know Jesus as their Lord and Savior.”

A special gathering for tens of thousands of children and their families on Sunday afternoon at the Parque el Tunal also included the famed Latin television star María Antonieta de las Nieves, known for her role as La Chilindrina on the long-running television show “El Chavo del Ocho.”

“I always thought that someday I had to do something more than make people laugh,” said Antonieta de las Nieves in a press conference in Bogotá. “I want to have fun, but with a good message. That’s why I’m excited to join with the Palau Team for this festival.”

All festival events included performances by top Christian musicians, testimonies from actors and international business leaders, and a clear message of hope and faith in Jesus Christ from Andrew Palau.

The festival also included a preview of the upcoming Palau movie, set to be released in North and South America in early 2019, as well as a new Spanish Audio Drama Bible project that is being led by the Palau Association and Grace & Mercy Foundation from New York City.

In addition to the 200,000 people reached in person through these multiple outreach events in Bogotá, more than 550,000 people from around the world watched the festival online through Facebook Live.

By the end of the week, more than 18,500 people had made public confessions of faith in Jesus, 100,000 New Testaments had been distributed, and working in partnership with Bibles for the World, an additional 50,000 copies of the Gospel of John were handed out during the three nights of the festival.

“This festival was a team effort. No one church or organization could accomplish something of this scale on their own,” said Kevin Palau, son of Luis Palau and president of the Palau Association based in Portland, Oregon. “It was a beautiful picture of the entire Body of Christ working together to bless a region.”

The goal of the campaign, just like all Palau festivals, was to shake the nation with the Gospel and help launch the Church into a powerful new season of evangelism and outreach. As part of this vision, the Palau Team gathered hundreds of younger evangelists from several nations throughout Latin America for an in-depth time of training, encouraging, equipping, and inspiring. This is part of the Palau Association’s multi-year campaign to build a network of more than 10,000 younger and up-and-coming evangelists around the globe.

In addition to clear evangelism, the festival also helped foster unity within the church body, bringing many churches together that had been divided over secondary issues for many years. This growing unity was made evident through the two pastor gatherings held in the lead-up to the festival which included more than 12,500 leaders from throughout Bogotá and the surrounding area. 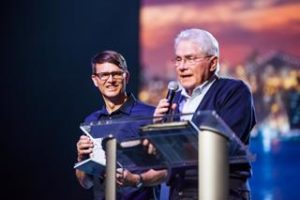 Andrew Palau shared the platform preaching the Gospel with his father, Luis Palau, at an earlier event

Luis Palau, who was diagnosed with Stage IV Lung Cancer in January, was hoping to join his son for this historic campaign, but unfortunately shared in a video days before the event that he, his team, and his doctors all agreed it was an extra danger to his health to attend. Instead, Luis’ wife Patricia travelled with the team to Colombia and greeted the crowd each night, sharing about their love for Colombia and the exciting growth that had taken place in the nation since the campaign in 1966.

The crusade in 1966 not only marked a powerful shift in the trajectory of Colombia, whose evangelical community experienced exponential growth following the campaign, but also set a model for citywide impact that the Palau Association has used to reach millions of people throughout the world for more than fifty-two years.

About Luis Palau: Luis Palau and his ministry have shared the Gospel with millions of people through evangelistic events and media over the past 55 years. He has held evangelistic campaigns in more than 75 countries and led an estimated 1 million people in public confessions of faith in Jesus Christ. His radio broadcasts in both English and Spanish are heard by millions on 5,000 radio outlets in 48 countries. He has authored close to 50 books, contributed articles on issues of faith to countless publications, and counseled business leaders, political leaders, and heads of state around the world.

About Andrew Palau: For more than 24 years Andrew Palau has played a key role in the ministry of the Luis Palau Association. He has been instrumental in building the LPA model for citywide outreach as an evangelist, director, and key team leader. He has guided campaigns, led church relations efforts, trained thousands of believers in friendship evangelism, and proclaimed the Good News of Jesus Christ in person to hundreds of thousands of individuals around the world through evangelistic campaigns. Andrew’s festivals have brought him and the Palau Association in partnership with thousands of churches in cities throughout Latin America, Africa, Asia, Europe, Australia, the Caribbean, and the United States of America. In addition to his father, Andrew’s own weekly radio broadcasts are heard by millions of people on thousands of radio outlets around the world. He is also the author of multiple books, including Secret Life of a Fool, a retelling of his personal journey to faith in Christ, and What is Christmas?, a groundbreaking evangelistic book published in China in 2012.

To learn more about the historical campaign and the significant impact it had on the ministry of the Palau Association, visit www.palau.org/bogota .

To read more about the recent Bogotá campaign, visit www.palau.org/events-bogota-2018.