Top Posts
‘Nothing is Impossible’ movie: Hoops, romance, second chances
‘God’s Smuggler’ Brother Andrew passes to his reward
Cultivating a Prayer, Care, Share Lifestyle
God Has Plans for Your Life
Worth and Value in the Kingdom of God
Grandchildren Bring Joy and Opportunities to Our Lives
Embracing Change and Changing Lives
Dark Academia and Dead Monks
She ‘intensely related’ to Mary Magdalene character on...
The Most Powerful Thing in the World
Home ANS Reports Evangelist Luis Palau Honored by National Religious Broadcasters 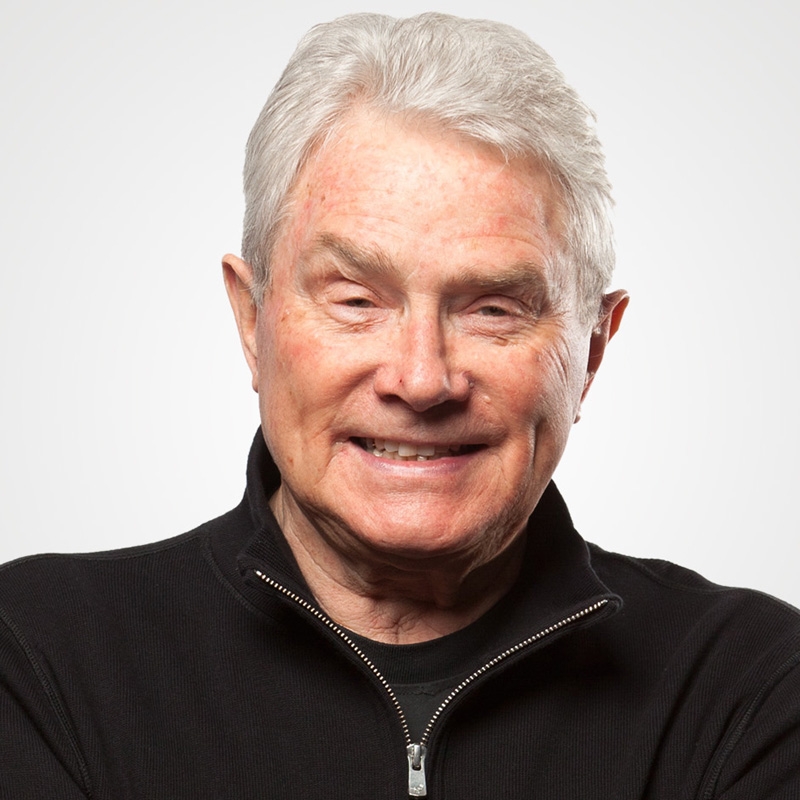 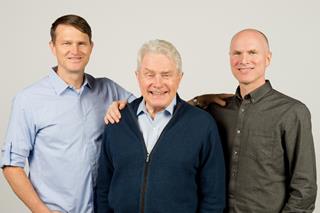 “Luis Palau is a model Christian evangelist and Gospel broadcaster who has had a monumental impact on the world for Christ,” said Dr. Jerry A. Johnson, president & CEO of National Religious Broadcasters. “Honoring Luis with this prestigious award is especially poignant coming in the very week of the funeral of Billy Graham, the world-renown evangelist with whom Luis has so often been compared.”

Johnson added, “NRB loves Luis Palau and we pray fervently that the Lord will grant him healing, even while we praise God for how He continues to use Luis through this illness to advance the Gospel.”

The National Religious Broadcasters Hall of Fame stands as a witness for current communicators, a showcase of warriors for Christ who live exemplary lives of valor and compassion, blazing trails and leaving paths for succeeding generations to follow. NRB’s most prestigious award is presented to an individual NRB member for invaluable contribution to the field of Christian communications, exhibition of the highest standards, and evidence of faithfulness in Christ. Palau was one of two individuals selected to receive this year’s award.

The Hall of Fame Award is one of 26 awards that will be presented during Proclaim 18, which takes place February 27-March 2, 2018, at the Gaylord Opryland Resort & Convention Center in Nashville. Also honored with the Hall of Fame Award this year was Dr. Billy Kim, Emeritus Pastor of Central Baptist Church in Suwon, South Korea, and longtime Christian broadcasting pioneer.

Palau and his ministry have shared the Good News of Jesus Christ with tens of millions of people through evangelistic events and media over the past six decades. He has spoken in 75 countries with more than one million registered decisions for Jesus Christ. He has authored close to 50 books, contributed articles on issues of faith to countless publications, and counseled business leaders, political leaders, and heads of state around the world.

This year, Palau celebrates 66 years of Christian broadcasting, having started in 1952 at the age of 18 with a seven-minute daily radio program at a local radio station in Argentina. Today, in addition to Palau’s radio outreach, his evangelistic festivals have produced some of the largest audiences ever recorded in cities from south Florida to South America. His ministry also includes an alliance of evangelists called Next Generation Alliance (NGA) that allows partner evangelists to collaborate, draw guidance, and resources from Palau’s vast experience, and become equipped to reach the world for Christ. More than 650 evangelists are currently involved in NGA.

Recently diagnosed with cancer, Palau was unable to attend Proclaim 18. Accepting the honor on his father’s behalf was Andrew Palau, who also presented a video tribute.

Peter Wooding, who provides TV reports for the Global News Alliance and also writes for ASSIST News Service (www.assistnews.net ) caught up with Andrew and asked how his father was coping with his new diagnosis. 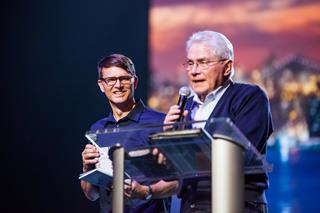 Palau said: “Thank you for praying for Dad — he’s not well in his physical but spiritually in his inner man he is as strong as can be. Full of authority and ministering as he’s able.  He’s recognized that he has cancer and it’s in the lung and it’s spread. We’re asking for healing. Please pray for him. However, he’s really primarily saying ‘let the Lord’s will be done. Let him be glorified in this’ and so the National Religious Broadcasters has honored him with an award of sort of a lifetime’s worth of media. He loves souls, so he loves the media and he loves to reach the masses in large settings like our festivals, but also radio, television, books — and anything to get the gospel out.”

Palau said that in the short-term, he is picking up a lot of his father’s activities.

“But in the long term I just returned from Bogota where we had 9,700 pastors for the pastors lunch.  I’ve had smaller festivals than their pastor’s conference. But they already knew I was going do the Saturday and Dad was going to do the Sunday and when they heard the word we were praying wondering what were their emphasis would be once they find out the news and they just said ‘look, we love Luis Palau we’re praying he will be there.’ And that is one of Dad’s driving goals is to stand there on that Sunday in Bogota and preach the Gospel this August, but they also said ‘look, you know this is a move of the Lord, the Spirit is among us, it’s a critical time in our nation with elections coming up.’ We’re together lifting our sights to God’s higher plane and we will be preaching the gospel in Bogota and we’re just believing that Dad will be there.”

Palau said the outpouring of love and concern for his father “has been phenomenal.”

“Well, you know  for) so many people there’s that season, we’re not accustomed to sickness — you know Mom had a cancer 30 years ago. She went through that and she knows the most, but it’s it was so unknown to us. So we just have been learning, and every step is a new day, and everybody responds differently. So we’re just working our way through day by day.”

Palau also said his family is rejoicing for Billy Grfaham on passing on to his Heavenly reward.

“Well, we were rejoicing for him just as Dad is rejoicing for that day that hopefully won’t be too soon, but will come eventually to us all, right? Unless the Lord comes before that time. But we were rejoicing, and I reached out to my friends in the family — some of the Graham children — and they asked for prayer and we’ve been praying and it’s for this very moment that we preach — am I right that people would be ready for eternity? Dad as a 10-year-old boy saw his father go to be with the Lord. He was sick and he died clapping his hands and singing a song about Heaven and a 10-year-old Luis Palau saw that situation and said ‘this is what my life will be about — getting people ready to go to Eternity, getting people ready to go to Heaven in that condition — and that’s the most important thing in life.’ So we’re excited in that sense. And Dad is ready and we’re thankful for Mr. Graham rejoicing in that place.”

Does Andrew have any specific memories of Dr. Graham?

“Well, I really do — besides all the stories that are famous in the family of his kindness and generosity to help Dad and Mom in the ministry and be such a good example. I remember that when we did missions all around the United Kingdom in the 80s Dad did the mission to London — 16 weeks there at QPR Queen’s Park Rangers (Soccer Club) Stadium. Mr. Graham was doing meetings all across the region and he put aside and allowed another preacher to take a couple of his meetings so that he could come and support Dad and be with us there. And I think that’s probably where the picture (of us Palau brothers) came from, or else it was in Amsterdam when we got that picture — we were little boys in funny matching powder blue suits.”

Palau is heading to the UK in June, and was Asked about his plans there. 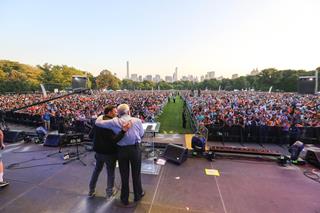 “Yes, we’re excited for our  next festival – (it) will be in Sunbury joining the body of Christ there. They’re doing some great work ongoing of course; and there’s good unity. And we’re going to serve on our part to share the Gospel there. Then in July, (we’ll be in) Eugene, Oregon — it’s a university town — University of Oregon is there: the body together wanting to share the Good News. And then in August, Bogota. So please pray for Bogota. You know in 1966 that’s where Dad had his first Festival Crusade breakthrough. All the dreams in his heart revealed themselves there. In that time they marched down the streets. There were only 50,000 Bible-believing Christians there at that time. Now there are 10,000,000 in just 52 years. So that will be like a beautiful bookend of his life if God gives him favor and he’s able to go there. So pray for that. And then he’s also praying to be in Grand Rapids, Michigan in September. I go there straight from here and we’re really excited about the incredible outpouring of faith and expectation in Western Michigan.”

Finally, Wooding asked Andrew about the latest news on the Palau movie?

“Well, it’s really something — you see all these signs and indicators of God moving us forward even in the midst of all this sad reality that Dad is facing. Many months before we knew of his sickness, there was a friend, a new friend who really had a vision to honor the Lord through telling the story of faithful people, especially young people like Dad who came to faith young, faced many trials. The movie focused on his early life from his birth, his father’s death, his coming to the Lord, and then all the way right up to this big breakthrough in 1966. So it’s a God-honoring, beautiful film. I think you’ll enjoy it and many people will be blessed and come to faith in Jesus Christ. That’s our dream.

“It should come out in October of 2018, that’s our plan and that’s our focus. But we leave it up to them — it’s really outside of our organization’s oversight but they’ve been doing a great job.”

Photo captions: 1) The Palau’s: Andrew, Luis, and Kevin. 2) Andrew preaching with Luis. 3) Andrew and Luis look out over a crowd at one of their crusade festivals. 4) Michael Ireland of ASSIST News Service.

** You may republish this, or any of or ANS stories, with attribution to the ASSIST News Service (www.assistnews.net ). Please also tell your friends and colleagues that they can get a complimentary subscription to ANS by going to the website and signing up there.