Top Posts
Knowing the One Who Always Keeps His Word
Pregnancy Resource Centers Fight For Life Amidst Opposition
This World is Not Our Home
Lessons Learned From a Gingerbread House
Let There Be Peace on Earth
‘I Wanna Dance’ movie: Whitney Houston’s success and...
Fact Finding, Sight Seeing, and Prayer Walking
Kidney donation led to 8 life-saving surgeries
The Power of Curiosity
When Love Came Down at Christmas
Home Tags Posts tagged with "Sight & Sound"

LANCASTER, Pennsylvania (ANS) – From the bustling streets of Jerusalem to the raging Sea of Galilee, JESUS is the musical stage adventure that has been seen by more than one million people.

Filmed in front of a live audience, Sight & Sound’s spectacular original production is now coming to the big screen – nationwide! Witness some of the most awe-inspiring, miraculous events as Jesus sets sail with fishermen, challenges the Pharisees and heals the hurting.

Experience the greatest rescue story of all time as the Bible comes to life in movie theaters for a special Easter event – three days only.

The greatest rescue story ever told comes to life on movie screens in a special nationwide event April 7, 9 and 11. 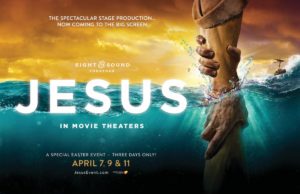 Filmed in front of a live audience, Sight & Sound’s JESUS is the action-packed musical stage adventure that takes audiences on a miraculous journey alongside the most famous person ever to walk the earth and the everyday people whose lives he changed forever.

More than one million people have experienced the live performance of JESUS at Sight & Sound’s theater in Lancaster, PA. Now, audiences across the country will have the opportunity to witness this awe-inspiring spectacle at the Fathom Events screenings.

“After more than 40 years of bringing the Bible to life on stage, the epic story of JESUS is one we had to bring to the big screen,” said Sight & Sound Chief Creative Officer Josh Enck. “This is the man who challenged the leaders of his time, loved every person he encountered, and changed the world forever.”

“This is our fourth time bringing a Sight & Sound stage production to cinemas, and with every event we do, they become even more grand,” said Fathom Events Director of Programming Katie Sawyer-Stachler. “We’re also excited to bring this particular story to big screens nationwide for families to experience just in time for Easter.”

“The theatrical productions from Sight & Sound need to be seen by as wide an audience as possible,” said Brian Mitchell, president of WTA Media, which leads marketing efforts for JESUS on screen. “Bringing JESUS to movie theaters opens the door nationwide for families to experience this great show.”

Sight & Sound Theatres began more than 40 years ago in rural Pennsylvania, where a dairy farmer went from producing milk to producing live entertainment with a purpose. Today that vision has expanded to two state-of-the art theaters in Lancaster, PA, and Branson, MO, where stories from the Bible come to life on stage. Each production features Sight & Sound’s signature massive sets, special effects and live animals. Still family-owned, Sight & Sound’s 675 staff members write, produce, design and build the original shows, drawing nearly 1.5 million audience members from around the world each year.