Top Posts
Colorado football coach Sanders’ unabashed faith
There’s A Light That Enters Houses With No...
Knowing the One Who Always Keeps His Word
Pregnancy Resource Centers Fight For Life Amidst Opposition
This World is Not Our Home
Lessons Learned From a Gingerbread House
Let There Be Peace on Earth
‘I Wanna Dance’ movie: Whitney Houston’s success and...
Fact Finding, Sight Seeing, and Prayer Walking
Kidney donation led to 8 life-saving surgeries
Home Tags Posts tagged with "Southern Baptist Convention"

LOS ANGELES, CA (ANS) — Pastor Rick Warren of Saddleback Church is stepping down from his position as lead pastor of the megachurch.

CBN News said Warren announced in a video to the church: “For 42 years, Kay and I have known this day would eventually arrive and we’ve been waiting for God’s perfect timing.” 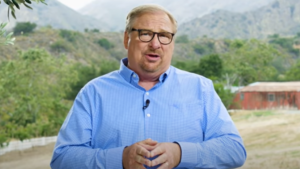 The OC Register reports him saying,”That’s always been my goal, to serve God’s Purpose in my generation. God has given me the privilege to serve multiple generations.”

Dr. Ed Stetzer, professor and dean at the Wheaton College Billy Graham Center, tweeted the news and called for prayers, saying: “Today, @RickWarren announced that they will begin searching for his successor. Pray for him, @KayWarren1, @Saddleback Church, and all their related ministries as they step into this next phase of ministry.”

The 67-year-old Warren will continue to serve as the Saddleback’s head pastor until a replacement can be found. He founded the Saddleback Valley Community Church in 1980, and it has grown into a global ministry with an estimated 40,000 participants.

Warren is recognized as one of the nation’s leading pastors. He has guided countless young leaders and inspired many of today’s prominent pastors to pursue their own callings to ministry.

His book, “The Purpose Driven Church: Every Church Is Big in God’s Eyes” is said to have encouraged pastors to lead a healthy and purposeful church.

Warren built the Purpose Driven Network, a global alliance of pastors from more than 160 countries and hundreds of denominations, that focuses on the people of the church and less on the building.

He also founded www.Pastors.com , an online interactive community that provides sermons, forums, and other practice resources for pastors.

The news of his retirement comes less than a month after Saddleback announced that it ordained three women as pastors, which goes against the traditions of the strictly male leadership within the SBC, to which Saddleback Church belongs.

The SBC community has seen some other major headlines in recent weeks, like Beth Moore’s announcement in March that she no longer feels at home in the SBC. The shift ended her professional partnership with LifeWay Christian Resources, the publishing, and distribution division of the SBC.

Also recently, Dr. Russell Moore revealed last month that he was leaving the SBC where he had been the president of its Ethics and Religious Liberty Commission since 2013.

CBN News said it reached out to Saddleback Church for comment on Pastor Warren’s departure but did not hear back at the time of publication.