BIRMINGHAM, ALABAMA (ANS) — Andrew Brunson, an American pastor who was imprisoned in Turkey for two years before the White House intervened in October of last year, warned younger Christians last week they are not prepared for the kind of religious persecution coming in the future.

Speaking during the Southern Baptist Convention in Birmingham, Alabama, the 51-year-old evangelical minister said those who prayed for him and for the nation of Turkey during his two years of detainment “sustained” him and his wife, Norine, according to Tre Goins-Phillips writing for Faithwire.com. 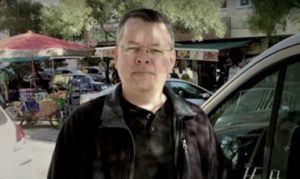 “The Lord just made me a magnet for prayer,” he said, according to Faithwire citing Fox News, “and I think someday you’re going to see that it was really something tremendous that God was doing.”

But the persecution Christians are facing globally, he warned, is really just the tip of the iceberg.

Brunson told pastors gathered for the convention: “I don’t think that we’re prepared for what is coming, especially the next generation. I fear that many of us are complacent and we’re unaware, and this means that the people in our churches are going to be blindsided by what comes. You are the ones, as pastors and leaders of churches, who have the task of preparing the next generation.

“Many of you,” he added, “are going to have the opportunity to stand in that line of suffering and you have to prepare yourself for that.”

According to the Faithwire report, Brunson, a missionary for 23 years, said his time in prison in Turkey “tested my love for God.” Even in the midst of that difficult trial, though, he said he made the decision to never compromise his relationship with the Lord.

“I decided that I am going to fight for my relationship with God,” he recalled. “If I lose my intimacy, my closeness to Him, then I’ve lost everything.”

President Donald Trump’s administration worked overtime to ensure Brunson’s release from Turkey last fall, imposing economic sanctions on the country. And when he finally returned to the U.S., Brunson visited the White House, where he personally prayed for Trump.

When he was speaking with the president, Brunson told Trump he and his wife “pray for you often as a family, my wife and I pray for you.”