Top Posts
Colorado football coach Sanders’ unabashed faith
There’s A Light That Enters Houses With No...
Knowing the One Who Always Keeps His Word
Pregnancy Resource Centers Fight For Life Amidst Opposition
This World is Not Our Home
Lessons Learned From a Gingerbread House
Let There Be Peace on Earth
‘I Wanna Dance’ movie: Whitney Houston’s success and...
Fact Finding, Sight Seeing, and Prayer Walking
Kidney donation led to 8 life-saving surgeries
Home Tags Posts tagged with "Unbridled" 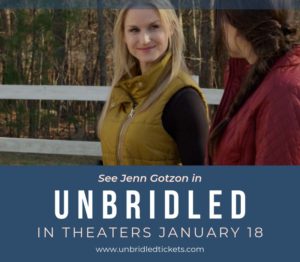 Unbridled – a girl and her horse story movie poster

“Frost/Nixon” launched Gotzon Chandler’s career a decade ago portraying President Nixon’s daughter Tricia in Ron Howard’s five-time Oscar Nominated bio-pic. Others include 2018’s Amazon’s movers-and-shakers and Netflix trender, “My Daddy’s In Heaven,” along with Oscar-nominated, “Alone Yet Not Alone” and upcoming bio-pic, “His Sunrise, My Sunset.”

In “Unbridled,” Jenn Gotzon Chandler plays an equine academy director based on the actual owner, Joy Currey of Corral Riding Academy. The program teaches abused teens how to develop trust, healthy boundaries and confidence by pairing them with horses.

In the movie “Unbridled,” the main character (Tea McKay) is neglected by her alcoholic mother (Dey Young), trafficked by her mother’s boyfriend (Oscar-Nominated Eric Roberts), rescued and brought to equine therapy where she is put under the care of the academy director (Gotzon Chandler). McKay is paired with Dreamer, a palomino horse (trained by Harmony Horsemanship’s Lindsey Partridge), who leads her to hope and freedom.

“Unbridled” releases the week of Jan 18 to theaters across the Midwest. For tickets and theater listings, go to www.UnbridledTickets.com

Gotzon Chandler is represented by Billy Powell at billy@wmarochester.com