(This article first appeared on WashingtonExaminer.com.) 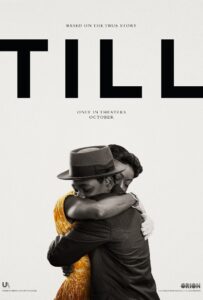 ORLANDO, FL (ANS)  White racists brutally murdered young Emmett Till in 1955 Mississippi.  His death, and his mother Mamie’s reaction to it, helped spark the civil rights movement.  MGM’s Till tells their compelling story.  What gave this grieving mother strength to pursue social change?

Writer/director Chinonye Chukwu tells this story “from the maternal point of view of Mamie Till-Mobley.”  We see Mamie (Deadwyler) singing and dancing with 14-year-old Emmett (Hall).  She ties his necktie, helps him pack, loves him deeply.

When she put him on a train in Chicago to visit Mississippi relatives, neither suspected impending tragedy.  Emmett was outgoing, humorous, and loved church involvement.  Mamie envisioned him as a pastor someday. 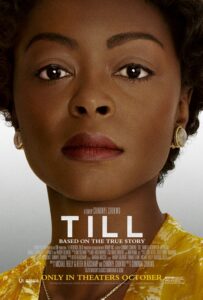 Chukwu “refused to depict [all the] brutality in the film,” focusing instead on “Mamie’s remarkable journey in the aftermath.”

We do see Emmett’s terribly disfigured face, and Mamie demanding an open-casket funeral for the world to see.  Thousands came.  Jet magazine published pictures of the corpse, sparking widespread outrage. 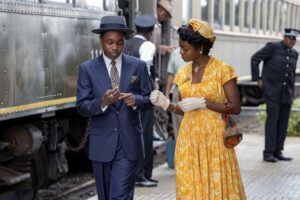 Roy Bryant and Milam stood trial for murder.  Witnesses to the abduction testified. The defendants said they released Emmett alive.  The defense argued the mutilated body was unidentifiable.

In Till, Deadwyler poignantly depicts Mamie’s courtroom testimony that she knew her only child’s entire body and that corpse was Emmett’s, even bearing his father’s ring.

The jury of 12 white males deliberated for just 68 minutes (including their Coke break), acquitting both.

In 2005, DNA tests confirmed the exhumed corpse was Emmett’s.  In 2007, Carolyn Bryant recanted her story, though not without controversy.  Grand juries have twice declined to indict her, most recently in August 2022. 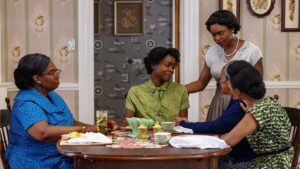 In the wake of the tragedy, Mamie traveled promoting racial justice.  She became a teacher, training boys and girls to give MLK speeches.  “God told me, ‘I have taken one from you, but I will give you thousands,'” she wrote. 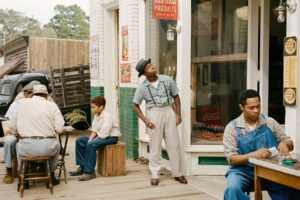 Sometimes overlooked in her story is spirituality’s central role, which Till includes.  Dartmouth professor Vaughn Booker argues that Mamie’s faith was foundational to her handling Emmett’s murder and her civil rights activism.

“I prayed for … strength…and…courage,” she recalled.  “Lord, take my soul… show me what you want me to do, and make me able to do it,” she prayed at the funeral. 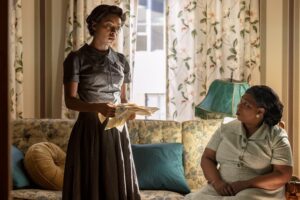 Over time, she saw gold emerge from ashes:  “I…thanked God that He felt that I was worthy to have a son that was worthy to die for such a worthy cause” (advancing civil rights).  Mamie maintained, “Emmett was not mine…he belonged to…God [who] had chosen him for this particular mission.”

She felt Emmett’s death helped her better appreciate “what Jesus had given for us, the love he had for us.”

“I never felt any hatred for Bryant and Milam,” she affirmed.  “…But as horrible a crime as they committed against my little boy, against me, against society, their true crime was against God.”  Each predeceased her; she lamented their eternal state:  “I feel so very sorry for them. In this world, they only had Mamie to deal with.”

Till makes me glad this world had Mamie to deal with.  This moving film powerfully presents her story with grace, dignity, and passion.

Rusty Wright is an author and lecturer who has spoken on six continents.  He holds Bachelor of Science (psychology) and Master of Theology degrees from Duke and Oxford universities, respectively. www.RustyWright.com