Top Posts
Knowing the One Who Always Keeps His Word
Pregnancy Resource Centers Fight For Life Amidst Opposition
This World is Not Our Home
Lessons Learned From a Gingerbread House
Let There Be Peace on Earth
‘I Wanna Dance’ movie: Whitney Houston’s success and...
Fact Finding, Sight Seeing, and Prayer Walking
Kidney donation led to 8 life-saving surgeries
The Power of Curiosity
When Love Came Down at Christmas
Home ANS Feature Trade War with China could hit Bible production

NEW YORK (ANS) — If trade-war negotiations between Washington and Beijing falter, tariffs placed on all of America’s imports from China could  affect the printing and production of Bibles.

Book publishers are warning that those tariffs will cause the price of printing the Bible to soar and potentially spark shortages, according to an article by Matt Egan writing for CNN Business. 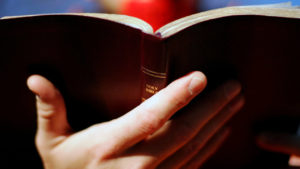 Bibles could cost more as a result of the U.S.-China trade war

CNN Business reports the problem is that most US publishers print the Bible in China because of the high cost and complexity involved in printing a text with roughly 800,000 words. HarperCollins Christian Publishing, a leading Bible publisher, estimates that about three-quarters of its Bible manufacturing expenses are in China.

The company owns Thomas Nelson and Zondervan, which it said are the two largest Christian book and Bible publishers in the United States. HarperCollins said that the 25% China tariffs would “seriously and disproportionately damage our business and our customers.”

HarperCollins has requested that Bibles, testaments, prayer books and other religious books be removed from the list of products facing tariffs. News of the impact from tariffs was previously reported by the Associated Press.

“We believe the Administration was unaware of the potential negative impact these proposed tariffs would have on Bibles,” Schoenwald said at a hearing in Washington last month.

CNN Business said that if the next round of tariffs take effect, they would cover everything the United States imports from China, including Apple’s (AAPL) iPhones, Nike (NKE) sneakers, drones, televisions and even L.O.L. Surprise dolls.

Publisher could halt printing of some Bible editions

After meeting with Chinese President Xi Jinping at the G20 summit late last month, President Trump announced those tariffs are on hold as the two nations resume negotiations. That trade truce relieved markets and businesses caught in the middle of the tit-for-tat tariff battle.

However, CNN Business reported some believe the trade war will re-escalate, due in part to the deep differences between the two nations.

“We still think an across-the-board US tariff on all imports from China is more likely than not,” Goldman Sachs chief economist Jan Hatzius wrote in a note to clients on Monday. He said “this is a close call” and likely won’t occur until the fall.

If that happens, HarperCollins said it will need to either absorb the cost of the tariffs, or increase prices and reduce sales volume. This would shift an “unfair burden on Bible readers, churches, ministries and outreach organizations,” Schoenwald wrote in the June letter to Robert Lighthizer, the United States Trade Representative.

HarperCollins also said that it may need to discontinue certain Bible editions altogether.

“The proposed tariffs on these high-cost but small-margin Bibles would be too much” for the publisher or consumers “to bear,” Schoenwald said.

“Alternative sources for printing are not readily available in the United States or elsewhere,” Schoenwald said.

What’s more, HarperCollins said the President’s tariffs are unlikely to encourage domestic printers to resume investing in this area.

The publisher told CNN Business it has not officially heard from the USTR on its request to have Bibles and other books removed from the tariff list.

When asked by CNN Business, a spokesperson from the USTR referred to the President’s announcement last month at the G20 summit announcing that new tariffs on China are on hold as negotiations resume.

CNN Business reported Bible sales in the United States totaled 8.1 million in 2018, according to the NPD, a market research group. That estimate includes all versions of the Bible and variations but not copies that are sold directly by publishers to churches.

The broadcast news outlet said that’s still twice as much as the 3.5 million copies sold last year of Michelle Obama’s “Becoming,” the next-best selling book in the United States last year, according to NPD.