Milton Keynes, England (ANS) – Children’s charity Toybox is celebrating a momentous occasion in the run up to World Population Day (11th July), as it has registered a milestone number of births and given the gift of a birthday to over 6,100 children across the globe. 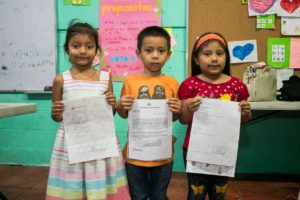 Beyond having a ‘birthday’ to mark their lives, the children whose births are registered will also be entitled to an official identity, access to healthcare, education, and employment.

World Population day aims to focus attention on the urgency and importance of population issues, and with the latest research from UNICEF indicating that one in four children are unregistered globally, the registration of so many children in just a six year window is undoubtedly progress.

Lynne Morris, CEO at Toybox comments: “If you don’t have your birth registered, it just sets you up to fail. There’s no other way of looking at it. Without having an official identity recorded with your respective government, there’s no access to education, healthcare, employment, or benefits of any kind. You’re not even able to be buried in an official cemetery. For want of another word, you’re invisible, and for a child living on the streets, this is not okay.

“This is why we began our birth registration projects. They started in Guatemala back in 2014 and since then we’ve expanded our work to reach Nepal, Bolivia and El Salvador. Our team and partners work hard to identify children on the streets who are unregistered and then support them through the legal and administrative process of getting identity documents, not to mention educating the children about their basic rights, including the right to an identity.

“It’s such an incredible feeling to be able to make a huge and truly impactful difference to the lives of these children, and help them on their journey, ultimately, taking away their invisibility and giving them a real identity.”