Top Posts
Knowing the One Who Always Keeps His Word
Pregnancy Resource Centers Fight For Life Amidst Opposition
This World is Not Our Home
Lessons Learned From a Gingerbread House
Let There Be Peace on Earth
‘I Wanna Dance’ movie: Whitney Houston’s success and...
Fact Finding, Sight Seeing, and Prayer Walking
Kidney donation led to 8 life-saving surgeries
The Power of Curiosity
When Love Came Down at Christmas
Home ANS Feature US Vice President Surprises Washington Prayer March to Say ‘Thank You’

Washington DC, USA (ANS)  –  US Vice President Mike Pence surprised the tens of thousands gathered at the Lincoln Memorial for the beginning of a major prayer march on Saturday September 26th.

According to www.billygraham.org it was quite a surprise, when one of the very people to be lifted up on Saturday afternoon by a sea of Christians gathering together from across the country, slipped in just as the Washington Prayer March 2020 began. 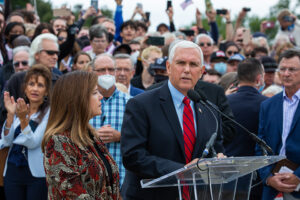 Watch a replay of Prayer March 2020

And the vice president came to say one thing to the prayer warriors flanking the National Mall:

For it is a nation of praying people who have sustained our country.

“When the president and I travel around the country,” the vice president continued, “the sweetest words we ever hear, and we hear them a lot, when people reach out and simply say ‘I’m praying for you.’”

Vice President Pence gave several examples of the importance of prayer and the leadership of a country.

George Washington often prayed for the leaders of the country and each state with an “earnest prayer” Pence said. Abraham Lincoln has been quoted in the White House saying, “I have been driven many times to my knees by the overwhelming conviction I had nowhere else to go.”

And that’s exactly what drove so many to the nation’s capital on Saturday, just six weeks before the election and at a time when the country seems more divided than ever.

“In these challenging times, we are to remember that in everything by prayer and petition with thanksgiving, we are to present our requests to God,” he said.

Vice President Pence closed his short address to the crowd, leading them in a familiar verse, 2 Chronicles 7:14.

“And when you pray, pray with confidence,” he said. “We stand today on an ancient promise that Americans have claimed throughout history, that if His people who are called by His name should humble themselves and pray, He’ll hear from heaven and He’ll heal this land.”

The 1.8 mile prayer march began at noon at the Lincoln Memorial and ended at the U.S. Capitol.  Marchers paused at key locations for focused prayers on crucial issues in America today.

Mobilising UK Christians to pray for society this October