Top Posts
Pregnancy Resource Centers Fight For Life Amidst Opposition
This World is Not Our Home
Lessons Learned From a Gingerbread House
Let There Be Peace on Earth
‘I Wanna Dance’ movie: Whitney Houston’s success and...
Fact Finding, Sight Seeing, and Prayer Walking
Kidney donation led to 8 life-saving surgeries
The Power of Curiosity
When Love Came Down at Christmas
A Walk of Faith Begins with a Step...
Home ANS Feature VP Pence quotes Open Doors’ data

Open Doors says the event, which was hosted by the U.S. State Department and began on Tuesday, is being touted as the largest-ever gathering on religious freedom in modern history. 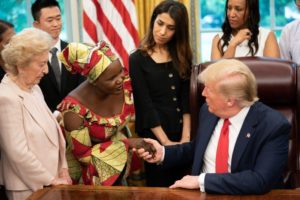 “Open Doors has identified North Korea as the worst persecutor of Christians for the last 18 years,” said Pence. His entire speech can be viewed below. Statements about Open Doors begin at 1:27:00.

“We are pleased that this administration takes seriously the increasing threats to religious liberty around the world and sees Open Doors as a leading voice and valuable resource on this issue,” said Curry.

“Millions of persecuted believers around the world should be encouraged that their plight is being addressed by leaders of the world’s most powerful government.”


In addition to having executive leadership present at the ministerial, Open Doors travelled in Nigerian Christian and persecution survivor, “Esther,” who met with President Trump alongside other survivors from 13 countries.

Esther was able to share her story of being a captive of Boko Haram. Since her release, Open Doors has served Esther and her young daughter, providing trauma counseling, food aid and encouragement.

“As advocates for the millions of Christians facing persecution around the globe, it’s deeply encouraging to see the attention this issue is receiving at the highest levels here in the United States,” said Isaac Six, Open Doors’ US Advocacy Director.

“We work tirelessly to make sure we’re providing the best information possible to policymakers, including through the World Watch List cited yesterday by Vice President Pence. Much more important than this, however, is what action is being taken to bring relief and protection to persecuted communities.”

Six continued, “One of our primary recommendations is that the State Department provide more time and resources for U.S. foreign service personnel serving at our more than 270 embassies and posts overseas. They’re on the frontline of U.S. foreign policy, and they must be given greater capacity to work on this global phenomenon. I’m hopeful the United States is moving in the right direction and applaud the new initiatives announced at the Ministerial yesterday.”

According to the State Department, the Ministerial to Advance Religious Freedom convenes global leaders to discuss the challenges facing religious freedom, identify means to address religious persecution and discrimination worldwide, and promote greater respect and preservation of religious liberty for all. The event focuses on concrete outcomes that reaffirm international commitments to promote religious freedom and produce real, positive change.

For more than 60 years, Open Doors USA has worked in the world’s most oppressive and restrictive countries for Christians. Open Doors works to equip and encourage Christians living in dangerous circumstances with the threat of persecution and equips the Western church to advocate for the persecuted. Christians are one of the most persecuted religious groups in the world and are oppressed in at least 60 countries. For more information, visit www.OpenDoorsUSA.org.

Photo credit: The White House; all photographs from the U.S. government are in the public domain.