Top Posts
Knowing the One Who Always Keeps His Word
Pregnancy Resource Centers Fight For Life Amidst Opposition
This World is Not Our Home
Lessons Learned From a Gingerbread House
Let There Be Peace on Earth
‘I Wanna Dance’ movie: Whitney Houston’s success and...
Fact Finding, Sight Seeing, and Prayer Walking
Kidney donation led to 8 life-saving surgeries
The Power of Curiosity
When Love Came Down at Christmas
Home ANS Feature Waking Up Dead

“Waking Up Dead” is the new book by worship leader and professional singer Eddie Anders. He shouldn’t be alive today. He should have been dead ten times over. That’s what the doctor said. But he didn’t die when he tried to kill himself. He’s a walking, talking, breathing miracle. The doctor said that, too. 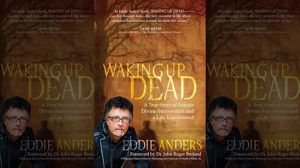 In Eddie’s book, Waking Up Dead, he describes what led to his suicide attempt and how he was healed.

Eddie grew up in church. It was there, he told The Stream, that he was taught to become a “professional Christian.” It was all about performance. “We teach each other how to perform for each other,” he explained. “I just set myself up for performing for God’s people and, ultimately, that can kill you.”

For months, Eddie was planning to take his life. He’d began squirreling away his prescription for Ambien along with other medications. The last straw? His church decided that at 50 years old he was too old to be their worship leader.

He’d written notes. He perfected his getaway plan. He’d go to a hotel in another city and take the Ambien. All 100 pills. That was Thursday.

Eddie woke up on Saturday. One of his first thoughts was to finish what he came to do. At some point, although he has no memory of it, he called his wife, Nancy. “I don’t remember it, I don’t remember dialing the phone, I don’t remember any of the conversation.” Evidently, he told her where he was. The police and the ambulance came.

He wasn’t happy. He didn’t feel relief. “I [was] aggravated, I [was] embarrassed and frightened.” He didn’t know what would happen.

Eddie’s pastor didn’t exactly make it any easier. When Eddie called his wife on Saturday, the pastor exclaimed “That little s*** is still alive.” The pastor and elders took a vote and decided that they didn’t want Eddie coming back to the church. Ever.

The pastor told Eddie that it would’ve been easier if he’d just died. He didn’t know what to do with Eddie being alive.

But something changed for Eddie in the hospital. While channel surfing, he ran across T.D. Jakes’ show. Jakes said something that made Eddie sit up and pay attention. “The spirit of suicide is on you,” Eddie recalls Jakes saying. “If God hadn’t rescued you, you’d be dead right now.” Eddie broke down. “I wept uncontrollably from the deepest recesses of my soul, barely able to breathe.”

A nurse read the 23rd Psalm and passed tissues around. Eddie’s wife prayed fervently for his healing and anointed his forehead with his tears. “I was being awakened from the inside out by the power of the Holy Spirit.” He added that all of those in the room experienced the “indisputable presence of God.”

“I was finally being set free and introduced to an entirely new dimension of living.”

The next day, Eddie had peace and joy. He laughed for the first time in a long time. “I felt uncommonly alive.”

This is the Day the Lord Has Made

It’s been 13 years since his suicide attempt. What keeps him going? “It’s a matter of deciding every day. I mean every day it’s still, ‘This is the day the Lord has made and I WILL rejoice and be glad in it.’ Because we overcome by the power of the blood and by the word of our testimony.”

Sadly, Eddie is not alone. “Churches are full of people who are like me,” he explained. “They’ve learned to perform for each other. Inside they may not be contemplating pulling the trigger or a mouthful of pills, but they’re slowly dying. A lot of them are committing suicide slowly, you know, with a fork or a drink or whatever. But they’re dying. Both spiritually and some of them physically as a result.”

Now he helps those who are where he was. “I’ve got a little chapel that was designed for me to minister to people where we gather together. It’s not a 12-step program, it’s all Bible-based. I kind of take people where God took me through the paces of rewiring.”

The Power of God

He also talks more about the power of the blood and the word of our testimony. “We’ve kind of gotten away from that in the church world,” Eddie explained. “We’re not offering people the power of God anymore.” He teaches audiences how to avoid the mistakes he made.

In addition to the book, he has an accompanying CD. It contains the music that helped him get through the dark times. “The music helps to tell my story. … and teaching people that if the world or the enemy steals your joy, he steals your strength. That’s what happened to me and that’s what happens to so many of us. We use the Word to come against that.”

“The idea is of waking up dead to the old life and waking up alive to the new one. You know, if we’re going to discover life in Christ we have to die to self. I’m literally the physical representation of Galatians 2:20. ‘That I no longer live but Christ lives within me, and it’s only by His grace that I live.’”

Nancy Flory is an associate editor at The Stream. You can follow her @NancyFlory3, and follow The Stream @Streamdotorg.

Called to be Men: Part Three