Top Posts
Colorado football coach Sanders’ unabashed faith
There’s A Light That Enters Houses With No...
Knowing the One Who Always Keeps His Word
Pregnancy Resource Centers Fight For Life Amidst Opposition
This World is Not Our Home
Lessons Learned From a Gingerbread House
Let There Be Peace on Earth
‘I Wanna Dance’ movie: Whitney Houston’s success and...
Fact Finding, Sight Seeing, and Prayer Walking
Kidney donation led to 8 life-saving surgeries
Home ANS Reports #WeStandWithLyra to Honour Slain Irish Journalist

LONDON, UNITED KINGDOM (ANS) — Journalists from across Great Britain will today join National Union of Journalists (NUJ) members and officials together with the heartbroken family, friends and colleagues of Lyra McKee at her funeral service in St Anne’s Cathedral, Belfast. 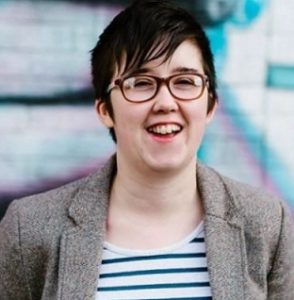 The NUJ said Lyra’s murder on Thursday night during a riot in Londonderry, Ireland, “is a devastating blow to her partner and family, and to her many friends and colleagues throughout the NUJ. We keep in our thoughts Lyra’s partner Sara, her mother Joan, sisters Nichola, Mary, Joan and her brothers Gary and David.”

In a joint statement, Michelle Stanistreet and Séamus Dooley, NUJ general secretary and NUJ assistant general secretary, said: “We acknowledge the support of our sister unions, the ICTU, trade union councils and the various community and political groups who have joined with the NUJ, the McKee family and the courageous people of Derry in condemning the killing of our brave, talented and committed friend and comrade. Special thanks are due to the members of the LGBT+ community, North and South, for their role in saluting Lyra, someone who did so much as an activist and was a friend to so many.”

The group said it will be joining local members at the funeral service and will share the NUJ’s collective condolences with Lyra’s partner and family.

The NUJ called on fellow journalists to take part in a symbolic action of solidarity in Lyra’s memory — if possible at 1pm, the start time for the service, or at some point during the day.

“Whether you are in a newsroom, at lunch, or working alone please take a stand for journalism and encourage those around you to join in a simple gesture of solidarity,” the union said.

At the same time, there will also be a vigil in London at St Bride’s Church on Fleet Street, which due to its location has a long association with journalists and newspapers because of its closeness to the former home of many of Britain’s leading newspapers. The church has been dedicated as a place of vigil for the whole day.  Books of condolences will also be available at many locations throughout Britain and in Dublin.

The NUJ said it has been supporting friends of Lyra who set up a GoFundMe account, as a practical act of solidarity to cover funeral expenses and to establish a legacy to mark Lyra’s contribution to journalism. You can donate online here – https://www.gofundme.com/in-memory-of-lyra-mckee

Following the funeral service, the NUJ will be announcing details of further supportive actions coinciding with World Press Freedom Day on Friday, May 3, 2019. This will include an evening event in London, which will mark Lyra’s contribution to journalism and also focus on the work being done to tackle the increasing threats facing journalists around the world.

According to the Committee to Protect Journalists, 54 journalists were killed in the line of duty in 2018.

The Washington Post stated that 2018 “was a brutal year for journalists, and it keeps getting worse.”

The newspaper said the most dangerous country in the world for journalists is Afghanistan, where 13 members of the press were killed last year, many in terrorist attacks.

Reporters in Mexico are also particularly vulnerable. At least six have died, often in acts of grotesque violence perpetrated by drug cartels and corrupt government officials.

The newspaper went on to say that additionally, at least 155 journalists around the world are imprisoned, along with 142 citizen journalists and 19 media assistants.

The newspaper said Turkey is one major culprit, imprisoning more than 250 reporters for their work and often accusing them of things like “making propaganda for a terrorist organization.” And two Reuters photographers continue to languish in prison in Myanmar (formerly Burma), where they’ve been charged under the obscure Official Secrets Act with “illegally acquir[ing] information.” The pair reported extensively on last year’s military campaign of violence and expulsion against the country’s Rohingya Muslim minority.

ANS Founder, Dan Wooding, says that daily, “many of our correspondents face great danger in bringing us their stories.”

Dan, himself, has been arrested and held in a prison cell in Lagos, Nigeria, and had a car bomb go off in the parking lot of the hotel where he was staying in El Salvador. He has also been shot at by guerrillas in Central America.

He asks readers to pray for the safety of our writers.