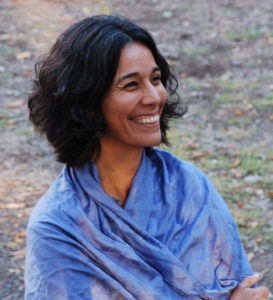 ALBUQUERQUE, NEW MEXICO—I watch as Michelle Otero sets up chairs at the Albuquerque Open Space, preparing for an Alone Together engagement she hosts.  Being the only other person in the room at the time, I ask If I can help. She complies.

We begin to talk while pulling out a table.  “What is this event exactly,” I ask.  “The Alone Together gathering is a means for artists from various backgrounds to discuss his or her art, while providing time to actually work on it,” Otero states. I nod.  “It’s kind of an outing for introverts. We introverts must unite,” her smile bright as she tucks in chairs under the table.

Albuquerque’s Open Space is a perfect setting for such an affair.  Outside the Cottonwood trees are changing colors—from green to gold; Sandhill cranes and Canadian geese are feeding in fields; and the Sandia Mountains provide a backdrop for a beautiful morning.

After setting up, we sit.  Otero wears jeans, a t-shirt, and black jacket.  Her computer, composition journal, books, and papers spread out before her.  She folds a cloth-like apron.

“I grew up in Demining, New Mexico” she states, after a question I pose about her life.  “I left for Harvard, graduating with a history degree. I came back to New Mexico for a while, only to leave again in 1996 to work in Belize.  I then spent time in El Paso, Texas, studying music at UTEP (University of Texas at El Paso).  In everything I was doing I wanted to do something creative.  My brother is a musician and I had an affinity for words.  I later enrolled at the Vermont College of Arts, receiving an MFA in Creative Writing.”

Two things I notice about Otero:  she smiles a lot and is quick to laugh. 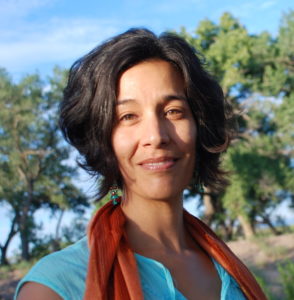 I ask about her day work (heaven knows most poets can’t make a living off of poetry).

“I was in Mexico for a while teaching creative writing for women affected by domestic violence and abuse,” she states.  “But now I mostly do creative consulting, helping with various non-profit organizations. I moved back to Albuquerque in 2006.   The epiphany for a job alteration came when my now husband saw me doing data entry.  He looked at me and said, ‘This has got to change.’ Since then, I’ve been engaged with creative endeavors. My recent work has been with Community Table.  It’s an organization providing farmers, artists, and business people with a platform for revitalization.”

Around this time a fellow named Andrew walks in.  Andrew is carrying what appear to be cardboard wings.  He sits down.  Michelle introduces us.  Andrew tells me he’s working on a project for a new theater group called Q-Staff Theatre, fronted by a Hungarian couple who are promoting a traveling theater program called Promenade.  I’m intrigued. Andrew explains what he is doing to the wings.

A little later, my wife, Melanie, joins us from shooting pictures outdoors, followed by a hospice nurse.

I ask Michelle about how she arrived at the idea for Alone Together. 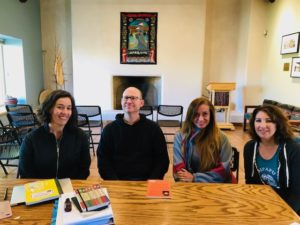 Participants at the Alone Together event at the Open Space

“I was part of a group of women who met regularly at a gathering called Sunday Salon.  We met once a month to discuss poetry and literature.   It was an opportunity for people to get creative.  It was led by poet Mary Oshi, a New Mexico PBS employee.  When we stopped meeting regularly, I thought I’d start something new and fresh.”

What type of poems did you discuss at the Sunday Salon, I ask.

“As an example, one of the poets, Tani Arness, wrote a series of poems about women in the Bible.  I remember her reading one about Lot’s daughter.  It was powerful.  We all shared poems and ideas. Mary Oshi read her poems as well.”  Michelle picks up a book, handing it to the nurse.  It’s a book of poems by Oshi.  The nurse hands it my way.

Sensing we needed to move forward with our Alone Together time, I stop asking questions.  Michelle says a few words and dismisses the group.   We scatter like birds.  Melanie heads to snap photos, I charge to the garden, then the gallery to view watercolors by Betsy James.  The others find solace in spaces unknown.

We gather after an hour of creative reflection.    The nurse shares a poem about one of her patients, Jane, who recently died at ninety-eight.  The nurse tells us Jane was a believer. It’s a beautiful piece.  Andrew tells more about his wings and opens up the conversation to include a love of culture and critique of politics.  Melanie shows us pictures, stating she wanted to capture what it is like to be “in the moment.”  I read an impression I got while watching Melanie and another photographer take photos.

The photographer says, “Have your own way of doing things;

Golden Cottonwood trees, and the bird-lined blue sky have

Their own ways.  And I agree with the photographer:  that’s

Fine.  Together we muse among the clatter of clicks,

Capturing moments that we may never see again.  We move

Closer to one another and breath, one picture at a time, a

Memory of our moment alive.

Otero reads an essay/poem she’s been working on.  She states that she’s “not yet sure what to do with it.”  It a brilliant poem revolving around the famed artist Luis Jimenez.  As it goes, Otero was introduced to Jimenez in Southern New Mexico and didn’t realize who he was, one of the regions finest sculptors and visual artists.  The poem weaves a tale of awareness, awakening and art. We’re captivated as Otero reads. 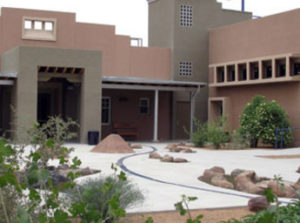 And I think the moment summarizes what Alone Together is about:  creativity in the midst of caring people highlighted by the unique New Mexico culture. And It’s all curated by a poetic personality, Michell Otero.

After the reading, we clean up, say our goodbyes and head back to life knowing that we can be alone together, leaning in to listen more deeply for the creativity within.

To learn more about the Alone Together events, click here: https://www.cabq.gov/parksandrecreation/open-space/events/alone-together-with-poet-laureate-michelle-otero