Top Posts
Knowing the One Who Always Keeps His Word
Pregnancy Resource Centers Fight For Life Amidst Opposition
This World is Not Our Home
Lessons Learned From a Gingerbread House
Let There Be Peace on Earth
‘I Wanna Dance’ movie: Whitney Houston’s success and...
Fact Finding, Sight Seeing, and Prayer Walking
Kidney donation led to 8 life-saving surgeries
The Power of Curiosity
When Love Came Down at Christmas
Home ANS Feature Are mysterious trumpet sounds in the sky a warm-up for Christ’s return? 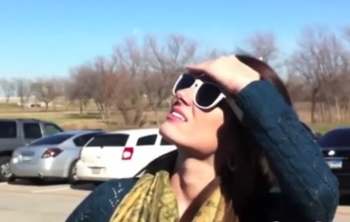 SOUTHERN CALIFORNIA (ANS — May 21, 2015) — “And He will send His angels with a great sound of a trumpet and they shall gather His elect from the four winds, from one end of the heavens to the other.” –Matthew 24:31

For almost a decade, people scattered throughout the world have reported unnerving trumpet-like sounds that are so loud they stop and scan the heavens to find the source.

To some, it sounds like the brass section of a symphony orchestra warming up, as demonstrated by a collection of videos filmed from the U.S., Ukraine, Germany and Belarus, according to a report by the DailyMail.

The first YouTube video recording the sounds was posted in 2008 by an observer in Belarus.

Kimberly Wookey from Terrace, British Columbia in Canada also recorded the trumpet sounds in the months of May and August, 2013. “On the morning of August 29, 2013 at approximately 7:30 am I was awoken by these sounds,” she recounted.

“I shot out of bed realizing it was the same sounds I had heard before and I ran looking for a camera to try to capture them with. I came out into the living room to find my seven-year-old son awake and scared wondering what was going on. He had said the noises woke him up as well and shook his window.

“I managed to record three clips showing almost five minutes of these strange sounds. After it was over and I sat down at the computer to upload the video. After checking my Facebook I noticed a lot of locals had heard the same sounds again but this time it was far more widespread.

“I have no idea what these sounds are but it is pretty strange and I am glad that I was able to catch them this time and share what I heard. The sounds were heard again on Sept 8th at 6:30am so far we have confirmed reports of it being heard from town to the lake, 25km away.

Wookey has speculated that the noise could be caused by a geophysical phenomenon. She contacted a local construction company to see if their activities might be the source. The company told her that none of their construction equipment could make such a noise.

About the writer: Mark Ellis is a senior correspondent for ASSIST News Service and also the founder of www.Godreports.com, a website that shares stories, testimonies and videos from the church around the world to build interest and involvement in world missions.