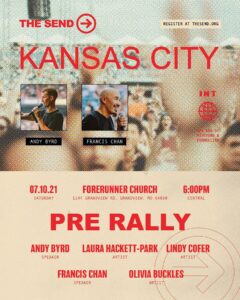 Believing a massive gathering at Arrowhead Stadium in 2022 is God’s plan to stir missionaries, intercessors and adoptive parents to action for a one-billion-soul harvest, leaders from different streams of the Body of Christ gathered in Kansas City to plan, pray and share the vision.

The meetings culminated with a rally and an offering on July 10 for the Arrowhead Stadium event, The Send/KC, set for early June 2022. Like The Send first in Orlando and later in Brazil, the event is a collaboration of five ministries.

Byrd, the leader of Youth With A Mission (YWAM) in Kona, Hawaii, said The Send is part of a story line leading to a crescendo moment for Millennials and Gen Z. 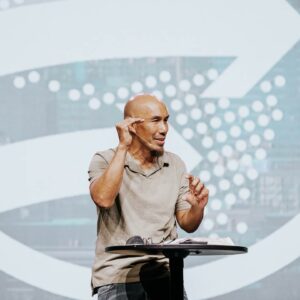 “For many years God has spoken about the significance of Arrowhead Stadium and Kansas City,” which is known for the International House of Prayer’s (IHOPKC) day and night worship and intercession over its 23 years, Byrd said with Chan and Metaxas at his side.

“So I believe with all my heart – this is not prophecy, this is fact – there is something in the soil of Kansas City that has drawn the heart of the Lord to a generational, defining moment The Send Kansas City/Arrowhead will be,” Byrd said.

The idea for The Send originated in Kansas City, The Call Founder Lou Engle said in video remarks. A prayer leader with The Call in 2011, Engle listened at that time to YWAM leaders who told him the Lord was shifting from filling stadiums with prayer and fasting to a missions-mobilization ministry, characterized by evangelism, signs, wonders and miracles. They said Billy Graham’s mantle was coming on the nation.

During the rally for The Send, The Call’s focus on prayer and fasting was compared to an arrow shot upward; The Send is its descent onto souls in harvest. “What goes up, must come down,” said IHOPKC Intercessory Missionary and Author Dean Briggs. “The arrow is The Send,” he said.

The Call indeed shifted in 2019 to The Send in Orlando, Florida, where 58,000 people worshipped and declared together a new era of missions, evangelism and action.

Then in February 2020, a month before the COVID pandemic shut down many nations, The Send/ Brazil drew 150,000 to three stadiums, with 70,000 people registering within six hours, breaking a record previously held by secular rock bands. Millions of people from 113 nations watched the live stream.

The Send leaders envision packing 70,000 into Arrowhead, the loudest stadium in America, with the goals of launching 200,000 missionaries to the nations, reaching 80 million Americans with the Gospel, enlisting one billion people to pray for global harvest, and sparking a third Great Awakening.

Byrd said the zeal of the Lord – not individual gifts or efforts – will accomplish this. 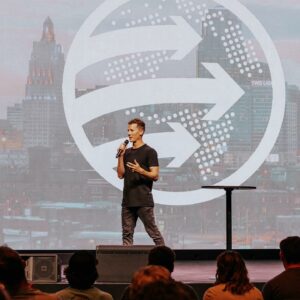 Youth With A Mission’s Andy Byrd.

Today, there are 420,000 missionaries in the world from every nation to any nation. “So we’re talking about one-half of the entire global missions force being launched again with another wave to the nations,” Byrd said.

Included in The Send’s focus for Arrowhead are high-school and college-campuses as mission fields, and adoptions from the foster-care system in America.

Prior to taking The Send to Brazil, leaders received an email from an Arrowhead Stadium employee who had watched The Send Orlando online, asking if they would consider Kansas City. Bickle noted stadiums never invite Christians. (Watch more Special Weekends in July video here: https://fb.watch/v/vGlBlYRF/)

Bickle said he had not shared 35- to 37-year-old prophesies about Arrowhead with IHOPKC staff for at least 15 years, until the day Byrd called him for prayer and counsel about hosting The Send in Kansas City – before the Chiefs had won the Super Bowl in 2020.

Before the audience at Forerunner Church and IHOPKC’s global live-stream viewers during the July meetings, Bickle unpacked remarkable prophetic history about his church, Arrowhead, revival, harvest, and awakening.

Pastor of a church in Overland Park, Kansas in 1984, Bickle thought the wealthy Kansas City suburb was a permanent home for his young congregation that consisted mostly of members in their 20s like himself. So when a man named Bob Jones shared details of his encounter with the Lord about moving the church, Bickle had doubts.

In the supernatural encounter, Jones was with the Lord on property owned by former President Harry S. Truman 37 years ago. Twelve miles away is the Truman Sports Complex which consists of two stadiums – Arrowhead and Kauffman – where the Kansas City Chiefs play football and the Royals play baseball.

Jones told Bickle he saw a worship and prayer movement coming to the Truman property at Blue Ridge and Grandview Roads. Lining Blue Ridge Road on either side, thousands of people gathered to watch a procession toward Arrowhead Stadium. Jones described worshippers marching and carrying Jesus on an Old Testament-type Ark of the Covenant.

The young-adult worship and prayer movement, Jones said, would lead to a one-billion-soul harvest during a time of tremendous persecution for Israel, ultimately resulting in its national salvation. The Chiefs, Jones told Bickle, would win the Super Bowl first. Jones also said the Lord would show Bickle what he had seen.

Bickle didn’t think much of it until he experienced an encounter of his own with the Lord two years later when he met another man, Paul Cain, who prophesied miracles, signs and wonders at Arrowhead Stadium.

Just as Jones prophesied it would be, Forerunner Church today is located on what’s known as Truman property along Grandview Road. The IHOPKC founded by Bickle hosts 24/7 worship and prayer. In 2020 the Chiefs won the Super Bowl, another fulfillment of Jones’ 1984 prophecy.

Then in 2021, after a face-to-face meeting with Bickle to discuss plans for The Send at Arrowhead Stadium, Byrd said he experienced “the fear of the Lord.”

If he didn’t hold The Send in Kansas City, then Byrd was told by the Lord: “You’re in direct rebellion. I will raise up somebody else. I have declared Arrowhead Stadium.”

If millions of people hear the Gospel for the first time, a billion souls come into the kingdom, and the foster-care system is replaced by families as a result of The Send, then so be it, Byrd said.

“I can say to you today that never in my life have I had more confirmation of anything than the significance of Arrowhead Stadium in Kansas City, and what God’s about to do in this coming season,” Byrd said.

The promises of God and the zeal of the Lord will be fulfilled at Arrowhead, Byrd said. “I think God is going to blow this beyond our wildest dreams. No human can do what God’s about to do. I would say our faith has only risen through all the constant delays,” due to COVID, he added.

As a Presbyterian teenager, Bickle heard the late Dr. Graham speak at Explo ‘72 inside the Cotton Bowl Stadium in Dallas. Produced by Campus Crusade For Christ, Explo ‘72 emphasized the re-evangelization of America and fulfilling the Great Commission.

Byrd said leaders believe The Send will take place 50 years to the day of Explo ‘72 “with a boatload of divine poetry leading the way.

“It will be exalting Jesus and, not only that, it will be looking to the nations, making it unacceptable to pass the baton to the next generation with 7,000 unreached people groups. The ripples that come out of Arrowhead Stadium will touch the nations of the earth,” Byrd said.

The Send KC will marry the global harvest to Malachi 4:6, a Bible verse prophesying a turning of fathers’ hearts to children and children’s hearts to fathers, through adoption.

“As we dove into some of the biggest pain points in the nation, trying to understand what the Send looks like on a local level, we realized through (personal) experience we’ve had the privilege of adopting two beautiful daughters out of the foster-care system. We’ve got a seventh child who is now a two-year-old,” Byrd said.

The foster-care system fuels human trafficking, incarceration and homelessness, Byrd said. “Some of America’s biggest issues stem from fatherlessness and the brokenness of the family. The foster-care system is the government trying to fix something that can never be fixed; it’s a family issue. So we said we have to fight for this,” he said.

The Send believes the most adoptive generation in human history is on the rise.

Lee Strobel – The Case for Christ