Top Posts
Knowing the One Who Always Keeps His Word
Pregnancy Resource Centers Fight For Life Amidst Opposition
This World is Not Our Home
Lessons Learned From a Gingerbread House
Let There Be Peace on Earth
‘I Wanna Dance’ movie: Whitney Houston’s success and...
Fact Finding, Sight Seeing, and Prayer Walking
Kidney donation led to 8 life-saving surgeries
The Power of Curiosity
When Love Came Down at Christmas
Home ANS ReportsCulture Art and Community at 516 ARTS 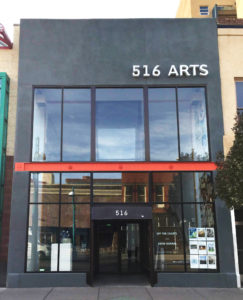 Martorell and Ungerleider are in Albuquerque for a conversation concerning an exhibit titled Puerto Rico: Defying Darkness. Before the conversation, I speak with David Ungerleider.  He provides me with a quick summary of his relationship to Martorell and discusses his role as an anthropologist, mentioning his book Fiestas de Santiago Apóstal en Loiza,a work about the influence of Afro culture within Puerto Rico. 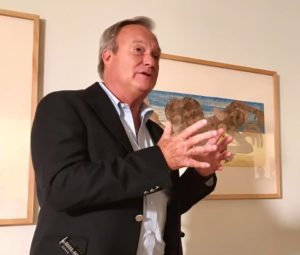 I comment on his role as an anthropologist.  His response: “Jesuits encourage us to get degrees in differing areas.  I chose anthropology due to my life-long interest in cultures of the world, particularly Central and South America.”

Dr. Josie Lopez escorts the two men to the front of the room. In her introduction, I learn that her inspiration for the name of the exhibit came from Martorell.  Martorell told her, “Defying darkness is a full-time job.” 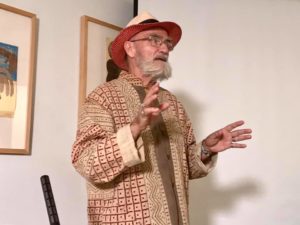 Considered one of the most prolific and important artists in Puerto Rico, Antonio Martorell is printmaker, painter, draftsman, installation artist, stage and costume designer, writer, illustrator and teacher. In addition to his art, he’s a frequent contributor on Puerto Rican television and radio.

Ungerleider entered the Society of Jesus in 1969 and was ordained a Jesuit priest in 1977.  He has degrees from several universities, both in the United States and Mexico, and is a board member of the Lannan Foundation, co-sponsor of the evening conversation. 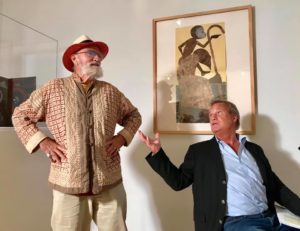 Martorell and Ungerleider originally met in the 1980’s.  According to Ungerleider, “During the six years I lived in Puerto Rico during the 80s, I was affiliated with the Centro de Estudios de la Realidad Puertorriqueña (CEREP) while Antonio was active with the Instituto de Cultura Puertorriqueña. We also were involved in the student strike at the University of Puerto Rico. Antonio was a key figure as an artist during those turbulent times on the island.”

Put another way: the two connected over art and an intellectual community. And this is how I’d summarize the hour discussion: a conversation of Martorell’s art, with Ungerleider as moderator, underscored by the role community plays in Puerto Rican culture, particularly in light of Hurricane Maria which devastated much of Puerto Rico.

Martorell and Ungerleider had much to say during the presentation. So rather than a complete exposition of the talk, I present some impressions, honing-in on the themes covered in the exchange. 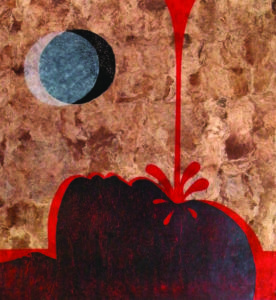 Throughout the hour-long conversation, Martorell showed slides of his art, quoted widely (poems, Charles Dickens, songs), discussed his recent work—some of which he brought with him, and shared his thoughts concerning Puerto Rican culture and politics.  After his presentation, time was opened for questions.  Here, Martorell and Ungerleider fielded inquiries ranging from Hurricane Maria and the current political and environmental impact to the state of Puerto Rico art.

Concluding the time, both men discussed a phrase used in Puerto Rico that both helps define a situation and provide hope for the future.  The word is bregar.  It is a multi-layered word with overtones of “dealing with it.”  But for Martorell it means much more. For him, the word represents what artist do:  making something out of nothing and bringing good from evil. This is what Puerto Ricans—artist included—do: create beauty from the blasts, be it nature, politicians, or people.  Afterall, Martorell ponders, “art is a dialogue with people, nature, and community. A community does well to give an artist a cue, and then let them go create.”