World Watch Monitor reports the court has not announced its decision. They report it will ‘reserve judgment’ for several days or possibly weeks.

Aasiya Noreen, commonly known as Asia Bibi, has been in prison for eight years after she received the death penalty in 2010 for blasphemy. Her crime was allegedly making derogatory comments about the Prophet Mohammed during an argument with a Muslim woman.

Asia Bibi has been charged with blasphemy in Pakistan

According to World Watch Monitor, Asia’s lawyer, Saif-ul-Malook, told Deutsche Welle (DW) that she stood a good chance to be released. “The incident happened on June 14, 2009, but the case was registered on June 19, 2009. The accused did not get the benefit of the doubt. Legally, it is a weak case,” he said.

“There were also contradictions in the statements of the witnesses,” he told the three justices of the Supreme Court.

The Lives Of Her Family Are Being Threatened

The case of the Catholic mother of five has drawn international attention. During his visit to Pakistan in December 2017, the EU’s Special Envoy for Freedom of Religion or Belief, Jan Figeľ, told officials that the renewal of their export privileges to Europe depended on the release of Noreen.

Pakistani Christians fear that even if she wins her appeal, and her blasphemy conviction is overturned, she will be prey to mob violence, as many Pakistanis are convinced she deserves to die.

“Bibi’s possible release could trigger protests and demonstrations across the country,” her lawyer told DW.

At the time of her appeal hearing, Noreen’s husband and daughter are in the United Kingdom. Speaking at an event hosted by Aid to the Church in Need, Ashiq Masih said his wife would “never convert to Islam,” adding “she is psychologically, physically and spiritually strong.”

“Having a very strong faith, she is ready and willing to die for Christ,” he told the Catholic News Service.

Masih told DW that his family’s life had been destroyed. “We are living a life on the run… Our lives are being threatened. We receive death threats constantly and are moving from one place to another – and we try to support each other,” he said, adding “I spent almost 45 years of my life in my native village. I had many friends there. But now I do not want to go back.” 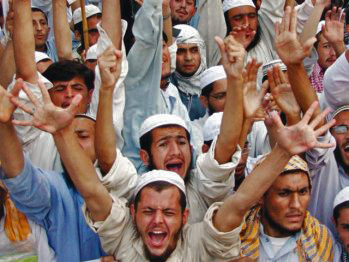 ‘In the hands of the extremists’

World Watch Monitor, over the years, has followed Noreen’s case closely. Following the rejection of her appeal by the Lahore High Court in October 2014 her then-lawyer, Naeem Shakir, told World Watch Monitor that with the passing of time it had become difficult for higher court judges to dispense justice, which, he said, “is increasingly in the hands of the extremists.”

Two politicians, Salmaan Taseer and Shahbaz Bhatti, who showed support for Noreen’s case and advocated for reform of the country’s blasphemy laws, were killed in the first three months of 2011.

In May this year Pakistan’s interior minister, who has championed the country’s minority communities, survived an assassination attempt by a gunman protesting against the country’s blasphemy laws.

In April Pakistan’s chief justice, Mian Saqib Nisar, said he would hear Noreen’s case personally. “Be ready, Saif-ul-Malook. I am going to fix your case soon and I myself will preside over the bench,” he reportedly told her lawyer.  As part of his decision to hear Noreen’s appeal, Justice Nisar ordered police protection for Malook restored.

Today, the three-member bench consisted of Nisar, with Justices Asif Saeed Khosa and Mazhar Alam Khan Miankhel. The lawyer for the complainant, an imam, Qari Muhammad Salaam was Ghulam Mustafa Chaudhry, the president of the Khatme Nabuwat (Finality of Prophethood) Lawyers’ Forum.

Malook told the Supreme Court that the imam did not witness the alleged blasphemy himself. Today Malook again said it was at a local village council, or panchayat, of around 1000 people where Noreen was forced to confess the alleged instance of blasphemy.

In 2014, Lahore high court judges categorically stated that Pakistani law would not take into account any such confession made to a random group, and they had at that time set aside evidence of all the witnesses related to the village council.

In the run-up to today’s hearing an Islamic party, the Tehreek-e-Labaik Pakistan (TLP), had warned that “if there is any attempt to hand her [Bibi] over to a foreign country, there will be terrible consequences,” reported DW. The party is known for its strong support of the strict blasphemy laws and has called for blasphemers against Islam to be put to death and for those who kill alleged blasphemers to be celebrated.

However, in February 2016, the Pakistani authorities hanged Mumtaz Qadri, the bodyguard who tried to justify his murder of Salman Taseer partly because of Taseer’s support of Asia Bibi.

In a memoir published in 2012, Noreen described the moment she heard her death sentence: “I cried alone, putting my head in my hands. I can no longer bear the sight of people full of hatred, applauding the killing of a poor farm worker. I no longer see them, but I still hear them, the crowd who gave the judge a standing ovation, saying: ‘Kill her, kill her! Allahu akbar!’ The courthouse is invaded by a euphoric horde who break down the doors, chanting: ‘Vengeance for the holy prophet. Allah is great!’ I was then thrown like an old rubbish sack into the van… I had lost all humanity in their eyes,” she wrote.

Blasphemy against Islam is an extremely sensitive issue in Pakistan. In November, protests against potential reform of the current laws brought life to a halt in the capital, Islamabad, and through international pressure increases for the government to change its legislation, conservative Muslim groups continue to vehemently refuse.

Pakistan’s new Prime Minister Imran Khan has spoken in support of the country’s strict blasphemy laws, which have been used disproportionately against religious minorities. Pakistani Christians, for example, make up only 1.5 percent of the total population, but over a quarter (187) of the 702 blasphemy cases registered between 1990 and 2014 were against Christians.

Pakistan is number 5 on the 2018 Open Doors World Watch List of the 50 countries where it is most difficult to live as a Christian.