Top Posts
‘Nothing is Impossible’ movie: Hoops, romance, second chances
‘God’s Smuggler’ Brother Andrew passes to his reward
Cultivating a Prayer, Care, Share Lifestyle
God Has Plans for Your Life
Worth and Value in the Kingdom of God
Grandchildren Bring Joy and Opportunities to Our Lives
Embracing Change and Changing Lives
Dark Academia and Dead Monks
She ‘intensely related’ to Mary Magdalene character on...
The Most Powerful Thing in the World
Home ANS Feature As anti-coup protesters face crackdown, ethnic nationalities appeal for aid

New Malden, England (ANS) – CSW has received first-hand reports of anti-coup protests in Burma’s (Myanmar’s) major cities of Rangoon, Mandalay, and the capital Naypyidaw, as well as in the ethnic states, particularly Kachin and Chin states. There are concerns about the implications of the coup for vulnerable internally displaced peoples (IDPs) in the ethnic states. 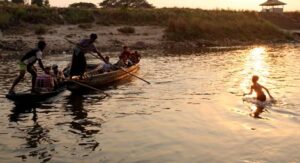 Police in Burma have responded to a fourth day of anti-coup protests with increasing force, seriously injuring several people after water cannons, tear gas and rubber bullets were deployed.

Dozens of protesters have been arrested, as tens of thousands of people across Burma demonstrated against the military coup which overthrew Aung San Suu Kyi’s democratically elected civilian-led government on 1 February.

On 8 February the Joint Strategy Team, a group of local humanitarian non-governmental organisations (NGOs) providing assistance to people affected by armed conflict in Kachin and northern Shan States, issued an appeal to the UN and the international community, calling for “safe and unimpeded humanitarian access” for NGOs providing assistance to IDPs and in response to COVID-19.

The Joint Strategy Team said that “the military coup is severely affecting the IDPs communities in Kachin and Northern Shan states. The military are taking more positions with armed troops and artillery, even in towns; and it has impacted on the transportation and movement of local people including IDPs. The civilian population is very worried, fearing that armed clashes will occur.”

According to the Joint Strategy Team, “accessing humanitarian assistance has been constrained since 1 February … In some IDP camps, the food support has covered only for January and the transportation to provide food particularly to non-government controlled areas is a major concern and challenge.”

Meanwhile in Karen State, according to the Free Burma Rangers, over 5,000 people have been displaced in the past two months due to Burma Army attacks, despite a ceasefire. Over 70,000 people are displaced in Arakan State, while over 100,000 remain displaced in Kachin State and northern Shan State. The Free Burma Rangers echoed the call for “direct humanitarian relief to the ethnic groups or cross-border relief groups who have proven track records for providing relief efficiently, accountably, and transparently.”

David Eubank, founder of the Free Burma Rangers, described the situation in Karen State in a report on 7 February: “Here in Karen State, the Karen people feel like the coup only reveals overtly what they and every ethnic already knew, that the army is totally in charge. The people here hope that this revelation will cause people who are ignorant of that fact or try to ignore it to not be able to ignore it anymore and realize the evil of the situation. Their own lives haven’t changed: they were attacked before the coup and they are being attacked now after the coup. Holding their babies in hiding places under the trees, they told me, “We don’t need you to give us food and medicine and shelter just stop the Burma Army from attacking our villages. We are not attacking them in their cities, why are they attacking us? if you stop them, we can take care of ourselves.”

In a powerful statement two days after the coup, by Burma’s Cardinal Charles Bo expressed the world’s “shock and agony” at the seizure of power by the Commander-in-Chief of the armed forces, General Min Aung Hlaing, undoing a decade of reform and the peaceful transition to an elected government in 2015. Addressing the military directly, Cardinal Bo said: “You all promised peace and genuine democracy. Democracy was the streak of hope for solving the problems of this once rich country. This time millions voted for democracy. Our people believe in peaceful transfer of power”.

Cardinal Bo called for peace and dialogue, and for the release of everyone who has been arrested: “They are not prisoners of war; they are prisoners of a democratic process,” he writes. “You promise democracy; start with releasing them.”

Benedict Rogers, CSW’s Senior Analyst for East Asia and author of three books on Burma, said: “The situation in Burma is extremely concerning. In addition to the police brutality against protesters, we are deeply concerned to learn of the arrest of Australian economist Dr Sean Turnell, an adviser to Aung San Suu Kyi. The courageous protests by tens of thousands of people across the country is truly inspiring, but we urge the international community to do more to support their call for the restoration of democracy, the release of political prisoners, and the establishment of a path to dialogue and reconciliation. We also call on the international community to respond to the urgent appeal from the ethnic nationalities, especially NGOs working with internally displaced peoples, for immediate cross-border humanitarian aid to access those who cannot be reached from inside the country, and for international pressure on the military to remove blocks to humanitarian access in the ethnic states. Finally, we call for targeted, robust sanctions against the military and their enterprises and a global arms embargo. The time for strong statements alone has passed; the time for action is now.”