Top Posts
Knowing the One Who Always Keeps His Word
Pregnancy Resource Centers Fight For Life Amidst Opposition
This World is Not Our Home
Lessons Learned From a Gingerbread House
Let There Be Peace on Earth
‘I Wanna Dance’ movie: Whitney Houston’s success and...
Fact Finding, Sight Seeing, and Prayer Walking
Kidney donation led to 8 life-saving surgeries
The Power of Curiosity
When Love Came Down at Christmas
Home ANS Reports As Second Earthquake Hits Nepal, Native Christians Undeterred by Aid Logjams 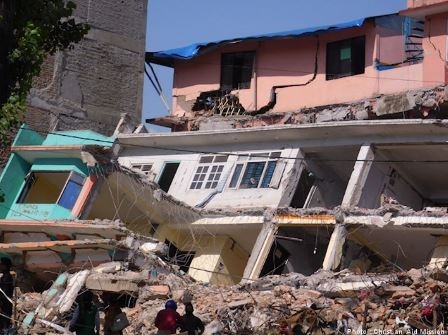 KATHMANDU, NEPAL (ANS – March 15, 2015) — With aid from abroad still sitting in the airport even as a second major earthquake hit Nepal this week, native Christian workers have not waited for promised funds and relief items to clear bureaucratic hurdles.

“Aid organizations have to go through the government, so the aid packages were still sitting in the airport,” Christian Aid Mission’s South Asia director, Sarla, said after returning from the Himalayan country this week. “Native missionaries have not been waiting, but have been buying items, loading them up and distributing them.” 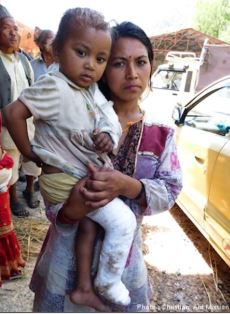 Emotionally and physically jolted, Nepalese whose homes remained standing after April 25’s magnitude 7.8 earthquake had just begun to return to them – keeping the doors open should they need to hurry out – when an earthquake registering 7.3 on the Richter scale struck on Tuesday (May 12). Its epicenter was about 45 miles east of the capital city of Kathmandu.

The death toll from the second quake was 110 in Nepal as of Thursday (May 14). With figures from remote mountain areas where most of the damages occurred still unavailable, the government estimates 8,000 to 10,000 people were killed in the first earthquake alone, with another 17,000 injured.

Two weeks after the first earthquake, many people were still angrily asking where promised international aid was; official import approvals, disorganization, corruption and the sheer logistical challenge of getting aid to remote mountain villages had many wondering if they had been abandoned.

The short-term and long-term effects of the disaster are difficult to fully comprehend. Hundreds of thousands of families are without homes as the monsoon season looms, and the quakes and subsequent landslides and avalanches have undercut the country’s two primary sources of livelihood, agriculture and tourism. A leader of an indigenous ministry working in Dolakha District, where most of the casualties of the second earthquake occurred, said that 70,000 of the 75,000 houses there were destroyed.

“It’s the beginning of the monsoon season, so it’s hard to build houses,” the leader said. “The new session of school is supposed to start soon, but there is no school building standing. Pray, pray, pray please!”

Another ministry leader said most survivors are living in the open air and need tents, food, water and medical assistance.

“There is no presence of government or any other organization,” the director said. “The people were so angry with the government. Some people are sick and afraid of flu and other epidemics.”

Throughout the 15 districts affected by the first earthquake, some 1,200 schools were leveled, leaving survivors thankful that it hit on a Saturday when children were not present. In the most affected area of Sindupalchowk, an estimated 44,000 of 66,000 homes were destroyed, Sarla said; another 20,000 were damaged and uninhabitable.

Landslides destroyed telephone lines, cutting communications for people desperate to find out the whereabouts of loved ones. Boulders the size of rooms blocked roads, Sarla said. Opportunists eager to exploit the natural disaster surfaced, blocking some relief efforts, as Sarla found out when accompanying a ministry bringing two truckloads of relief items to villagers.

“At one point the army stopped us and asked us if we needed any guards,” Sarla said. “I wondered what they needed guards for. It turns out that for the first six or seven days there was nothing, no aid deliveries, and the first truck that came was looted.”

When the two truckloads stopped, as the road ended in the area, the native Christian workers were able to deliver food to 75 families from four villages.

“The pastor did a great job, carrying large packs of relief items on his back,” Sarla said. “As I looked up, I could not see one single house standing.”

She spoke to one older woman who said she had three sons but did not know where they were. Another woman received rice but was unable to carry it because she broke her hand in the earthquake, Sarla said. Most of the people she saw, in fact, were women, as many Nepalese men work in Gulf countries, Kathmandu or serve in the military.

While the number of Christians killed in the earthquake is unknown, she learned of at least 111 who perished. The estimated number of Christians in Nepal is nearly 1 million since Christian Aid began assisting Prem Pradhan, widely recognized as the first apostle to Nepal, in the 1950s. The total population of the country is estimated at 32 million.

A native of Nepal, Sarla said she was thankful for organization founder Robert Finley and the role that Christian Aid has played in bringing Christ to Nepal.

Nepalese Christians are doing all they can to distribute aid, and Sarla said they are looking forward to a day when those who receive their help will gladly hear their message of hope in Christ Jesus.

While the emotional toll worsens for people living with daily aftershocks and another earthquake of 7-plus magnitude, Sarla said there is greater hope for those in Christ.

“In Bhaktapur District, outside Kathmandu, I could smell the smell of death – bulldozers were trying to clean up, but we knew there were bodies still there in the rubble,” she said. “I was crying out for the people of Nepal, but for those who are in Christ, we have a new beginning. If our bodies are destroyed, we have eternal hope in Christ.”

Note: Christian Aid Mission is an evangelical missionary organization based in Charlottesville, Virginia, that assists indigenous missionary ministries overseas through prayer, advocacy and financial support. Since 1953, Christian Aid Mission has identified, evaluated and assisted more than 1,500 ministries in more than 130 countries that are reaching the unreached for Christ in areas of the world where there is no witness for Christ, where Christians suffer from poverty or persecution, or where foreign missionaries are not allowed. Today, we assist more than 500 ministries overseas with tens of thousands of indigenous or native missionaries in the field. These ministries are currently working among more than 1,000 people groups in 100+ countries around the world. For more information, please visit www.christianaid.org .

** You may republish this and any of our ANS stories with attribution to the ASSIST News Service (www.assistnews.net )