Guzang, Cameroon  (ANS) – Another Bible translator in Cameroon has been murdered following an attack in his village, according to Wycliffe Bible Translators. 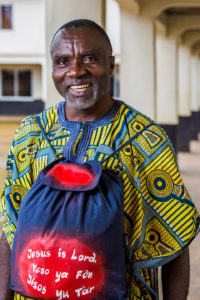 The attack occurred in the village of Guzang, in the northwest of Cameroon, a region where there is a lot of civil strife. Christopher bled to death after being shot in the leg by unidentified gunmen. He leaves behind a wife and seven children.

Keyeh Emmanuel, the General Director of CABTAL (Cameroon Association for Bible Translation and Literacy), says: ‘A number of people, including some key translators of the Moghamo Bible translation and literacy project, had relocated to Bamenda due to the ongoing socio-political crisis in the northwest and southwest regions. Since Christopher had a bigger family he decided to stay in the community to finish the New Testament in the Moghamo language, which is in its final stages. Christopher is gone but we pray that his last pastoral counsel to the fighters will contribute to bring lasting peace in the Moghamo area and to Cameroon.’

Keyeh continues: ‘We ask for prayers for Christopher’s widow and family as they face life without a father who was the breadwinner of his family. And also for the Moghamo team as they go through this challenging moment.’

Christopher’s murder follows the death a month previously of Kwo Akwo Eyoh, the key translator of the Bafaw Bible translation project, after a brief illness. Keyeh comments: ‘Pray for us at CABTAL as we deal with the loss of translators.’

James Poole, Executive Director of Wycliffe Bible Translators, said: ‘This tragic news reminds us how much the gospel message is urgently needed in Cameroon. Until people are transformed by Jesus, there will be no lasting peace. We continue to work with local partners to translate the Bible so that every Cameroonian can read the Bible in the language that speaks to them best. Please pray that the work of Bible translation in Cameroon will continue despite setbacks, and that people will discover the life-giving message of Jesus.’

Walk with Jesus through the Valley