Charlotte, USA (ANS) – The Billy Graham Rapid Response Team (RRT) is offering the love of Christ in Charlotte, North Carolina, after several days of protests following the death of George Floyd in Minneapolis.

The Billy Graham Association reports that on Sunday afternoon, more than 50 church groups came together in First Ward Park uptown to pray for the Queen City. The calm gathering was a stark contrast to the previous night when demonstrators threw items at law enforcement officers, and officers used tear gas to disperse the crowd. Property was damaged and businesses looted Saturday, just hours after Charlotte officials declared a state of emergency. 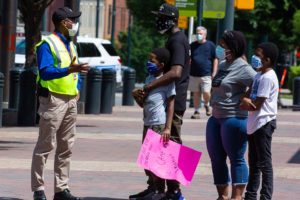 At least a few people were injured over the weekend in protests, including police officers. Some demonstrators were arrested on varying charges from assault to illegally possessing a gun. Others gathered have insisted the protests remain nonviolent.

A dozen Billy Graham chaplains are ministering wherever needed most on Charlotte streets to offer prayer and help share the light of Christ during a dark time for the nation. While the Billy Graham Evangelistic Association (BGEA) is headquartered in Charlotte, North Carolina, the ministry first called Minneapolis home for over 50 years. Since Thursday, another team of chaplains has been  been ministering there in Minnesota—where Floyd died while in police custody.

Franklin Graham called for nationwide prayer among churches Sunday, and Anne Graham Lotz invited women to pray for America during a special event on Sunday.

“Our nation is in trouble and we need to turn to Christ,” Franklin Graham shared in a Facebook post.

You can watch a full video update on the Billy Graham Rapid Response Team in Charlotte posted by our partners at the Global News Alliance: