Top Posts
God Saves Your Tears in His Bottle
Overcoming Common Misconceptions and False Assumptions
Character-Building Dilemmas
Set Your Heart on Things Above
The Power of Facilitating Partnerships and Collaboration
When We Don’t Feel Worthy
Vision For One Billion Souls By 2030 Unites...
Middle East Christian Converts Receive Bullet Death Threats
The World Needs More Audras
The Significance of the Seventh Man
Home ANS Feature I Was Beaten Up By Antifa 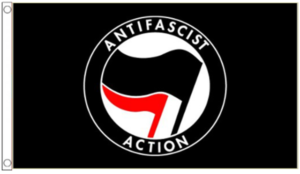 Anti-fascists in pre-WWII Germany were the communists.

Washington D.C. (ANS) – I was walking down the street in Washington DC during the protests.  I noticed the ISIS-like black and white flag of Antifa.  They were not violent, but just loud and obnoxious as usual. Before I knew it, I was beaten up by ANTIFA.

As the day wore on, though and I came out of an office, things had started to change.  Walking near the White House, Lafayette Park which is always a bit noisy with various groups around, this time it was different.

ANTIFA was different.  As the San Francisco Chronicle stated in 2017:

Everyone is dressed in black, they are extremely organized and move, using apps in an organized formation.  It became frightening watching them all looking at their iPhones walking in military precision together, straight ahead, left, right. They are carefully organized, all wearing the same black clothing so you cannot figure out who they are.

Then the signs came out

I couldn’t believe my eyes because as they began to march in the middle of the street, right off the White House the signs said, “Kill Them.”  It was one thing to demonstrate, another to demonstrate with a little organization, but this was a well organized and funded army now urging killing.

Suddenly they turned and with military precision, all began walking and I was in the middle of it.  I quickly moved to the left of the street to get out of their way, but the massive black army began to move faster and faster.  Suddenly I was in the middle with no way to get out.  Like a steamroller on hot asphalt, they just mowed me over.

As I turned, three white girls, with the nastiest expressions in their eyes, the only part of them you could see through their black masks, punched me and shoved me to the ground and moved on with person after person just stepping over me.

I was so shocked that it took a second to understand what had just happened.  However, I was able to get to the side of the street and stand up, just in time see them all curse me as they marched back in North Korean military precision.

It uses the exact same tactics and methods that Communists are using in Hong Kong, North Korea, China, and all the other totalitarian states.  They can’t win the discussion so they just use violence.  What is happening across the country is not accidental, it has nothing to do with the killing of George Floyd.  It is very simple to understand what happened.  Whipped up by the media, regular people began to gather, then ANTIFA merged into the demonstrations and engaged in their extremely well organized and planned operations.   These are not random people throwing bricks.  Their plan is executed with precision including looting and violence.

In this writer’s opinion, this appears to be an organized plan to breakdown and destroy society as we know it.  What do they want to replace it with?  We don’t know and they are not saying.  Anti-fascism sounds good, that is, until you learn what it is they stand for.  Unfortunately, our media won’t tell us.  Communism, fascism, and racism are all evil.  Let us hold fast to what is good, and overcome evil with good.  (Romans 12:21)