Top Posts
‘Nothing is Impossible’ movie: Hoops, romance, second chances
‘God’s Smuggler’ Brother Andrew passes to his reward
Cultivating a Prayer, Care, Share Lifestyle
God Has Plans for Your Life
Worth and Value in the Kingdom of God
Grandchildren Bring Joy and Opportunities to Our Lives
Embracing Change and Changing Lives
Dark Academia and Dead Monks
She ‘intensely related’ to Mary Magdalene character on...
The Most Powerful Thing in the World
Home ANS Reports Vietnamese Christians excluded from official COVID aid

Witney, England (ANS) – Partners of the charity Open Doors, are reporting that Christian families in Northern Vietnam are being passed over in the distribution of food and medicine. 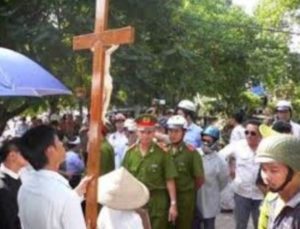 Christians in Vietnam hold the cross high as they face persecution

The charity says a number of families from a district of northern Vietnam reported being turned down point blank when they asked for food. In total 107 individuals in total including the elderly and children were denied the goods by local authorities.

“You are Christians and your God will take care of your family! The government is not responsible for your families!”

“These families are poor,” says Chau*, one of the partner-workers in Vietnam, who has worked to offer assistance in lieu of official aid. “When they learned that the government’s support is coming to their district, they were so happy but only to find out that they were not on the list because they are Christians.”

Although Vietnam has already lifted its nationwide lockdown due to the COVID-19 pandemic on April 23 and some Vietnamese have already begun to go back to their normal lives, the government and several charitable organizations are still providing countrywide support – especially to those on low incomes or who have lost their jobs during the lockdown.

The families that reported being denied this aid, work and live near the Chinese border. Due to COVID-19’s pandemic’s effect on the country’s economy, their work has stopped. They strive to provide food for their families, and they eke out what little they have day-by-day.

The latest report, appears to be the tip of a much larger iceberg, of aid discrimination, not only in Vietnam, but around the world, where Christians are a minority.

“It’s a story that we’ve heard again and again, since the start of the pandemic,” says Henrietta Blyth, CEO of Open Doors UK and Ireland.

“Some lives are considered unworthy of saving, because of their decision to stand by their faith. Make no mistake: the crisis is being used as a weapon against Christians. We’re seen discrimination against Christians in ration distribution, denying Christian health workers access to protective clothing, and opening mosques but keeping churches closed.”

Open Doors, working through local partners, is currently in touch with these families and is arranging to provide food packs and other urgent needs for these families. For many Christians, intervening like this is a risky activity.

“If Christians ignore COVID-19 restrictions, in order to stop their brothers and sisters from starving, they can also alert the authorities of their existence as a community. And that will mean serious persecution for them in months and years to come – it’s a terrible dilemma.”