Top Posts
When Love Came Down at Christmas
A Walk of Faith Begins with a Step...
God is Rich in Mercy
Everyone has a Story to Share
‘Till’ movie: Racial murder helped spark civil rights...
Leaning His Head On Jesus, This Evangelist Hears...
Timing, common ground, and fruitfulness in witness
Step Out of the Traffic
In Support of Ukraine
Living an Imperfect, Unfinished Life
Home ANS Reports Billy Graham Rapid Response Team Sends Chaplains to New York City

CHARLOTTE, N.C., March 29, 2020 – The Billy Graham Rapid Response Team (RRT) is sending crisis-trained chaplains to New York City, to serve in conjunction with the Samaritan’s Purse Emergency Field Hospital that is being set up to treat COVID-19 (coronavirus) patients. Chaplains, along with the RRT’s Mobile Ministry Center, will deploy from the Billy Graham Evangelistic Association (BGEA) headquarters in Charlotte on Monday, March 30, at 9 a.m. 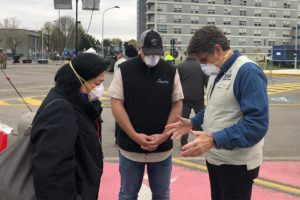 According to a press release Franklin Graham, president of BGEA and Samaritan’s Purse, and his son Will Graham, who is vice president of BGEA, will both be on-site at BGEA to pray with the chaplains before they depart for New York City.

“People are dying from the coronavirus, hospitals are out of beds, and the medical staff are overwhelmed,” said Franklin Graham. “I’m thankful for all the companies and individuals across this country that are pulling together and doing their part in this battle.”

More than 30,000 cases have been reported in New York City, with thousands of new positive tests being reported daily.

“As our own nation now has the most confirmed cases of COVID-19, the Billy Graham Rapid Response Team has crisis-trained chaplains ready to deploy to New York City—the epicenter of the outbreak—to offer emotional and spiritual care and to share the hope found in Jesus Christ to doctors, nurses and the community at large,” said International Director of the RRT Jack Munday.

Will Graham, who was recently with the RRT in Nashville, Tennessee, following the devastating tornadoes, said, “Billy Graham Rapid Response Team chaplains run toward disasters to offer compassion and comfort to the hurting. We’re thankful for the chaplains who are voluntarily putting themselves into a very difficult situation—at a very tumultuous time—to minister to those who have been devastated by this terrible virus.”

Prayer is an Essential Activity