One year on since Christian charity Help The Persecuted began evacuating hundreds of persecuted believers from Afghanistan, they are continuing to help resettle these displaced families including Farida, her sister and her mother, who are now starting a new life in America. 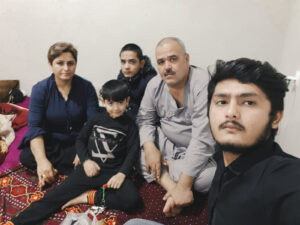 “It’s hard to believe it has been one year since the Taliban arrived in Kabul and chaos ensued. As a ministry, we had no idea the journey we were about to embark on and how God would use us to save lives,” remembers Help The Persecuted CEO and President Joshua Youssef.

“Probably one of my most distinct memories from that week was the voice mail our team member received from an unknown woman. She was hiding in her house and speaking in a loud whisper. While I could not understand the original message without translation, what was universally understood was the desperation in her voice.”

‘Excuse me for calling you a lot. I am very worried, and my last hope is for you to get us out of here. My father has been missing since yesterday and we cannot find him. And we are afraid that that the Taliban will attack our house. And we are afraid that they will take the young women and girls with them…we are waiting for your call and action.’

Over the next few months Help The Persecuted was able to help more than 750 persecuted people escape including Farida’s family. And just last week (almost one year from her desperate call), they landed safely in their new home country the United States of America.

“Thank you so much. What you’re doing for us, it’s a big thing for us. We are in a good place right now, and everything is because of you. Really, thanks to all of you,” said Farida.

Joshua concluded: “Today, as we look back, we give thanks for the partnership and prayers of faithful supporters that helped us Rescue, Restore and Rebuild lives like Farida’s! There is still work to be done with so many evacuees still waiting to resettle, while others remain at-risk inside Afghanistan. On the one-year anniversary of the Taliban takeover, we are petitioning the US and other governments to help us resettle these remaining Christians.”