Top Posts
Knowing the One Who Always Keeps His Word
Pregnancy Resource Centers Fight For Life Amidst Opposition
This World is Not Our Home
Lessons Learned From a Gingerbread House
Let There Be Peace on Earth
‘I Wanna Dance’ movie: Whitney Houston’s success and...
Fact Finding, Sight Seeing, and Prayer Walking
Kidney donation led to 8 life-saving surgeries
The Power of Curiosity
When Love Came Down at Christmas
Home ANS Feature Calls for Urgent Action for Nagorno Karabakh Ceasefire

London, England (ANS) – In the midst of the conflict in Nagorno Karabakh (Artsakh) lies a profound symbol of hope – The Lady Cox Rehabilitation Centre – an internationally recognised special needs ‘Centre of Excellence,’ which was founded in 1998, following the end of the Nagorno Karabakh war.

But earlier this month as attacks escalated from Azerbaijan all of the staff were forced to evacuate.  Baroness Caroline Cox whose charity HART supports this vital work, is calling on the British Government to act urgently for a return to the ceasesfire so this vital centre can reopen. 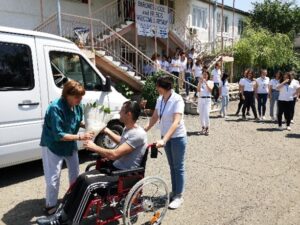 Baroness Cox being welcomed to the centre in 2019.

She told the House of Lords: “Azerbaijan’s continuing attempt now at ethnic cleansing involves violations of international law targeting civilians with tanks, helicopters, heavy artillery, multiple rocket systems including Smerch and cluster bombs. Therefore will the minister say what the Majesty’s Government is doing more actively to promote a ceasefire?”

In an interview with the Global News Alliance Baroness Cox explained how the the staff at their special needs centre had been impacted by the conflict:

“Since the fighting suddenly exploded most of the staff, nurses and specialists have been sent to Yerevan with their children for obvious reasons and the director Vardan himself is back inside Karabakh and is using his time to try to help people trapped in basements and cellars taking them medicines and helping in the middle of a very active war zone.”

She concluded by urging prayer for peace to return to this troubled area: “We do have a God who can do marvellous things, more than we can ever imagine and the God of miracles. And I think they need some of God’s miracles.  But that happened during the last war in the 90s when I was there and I just ask you to pray God’s miraculous protection for His people.”

You can watch a full video report produced by our partners at the Global News Alliance here: