Top Posts
Colorado football coach Sanders’ unabashed faith
There’s A Light That Enters Houses With No...
Knowing the One Who Always Keeps His Word
Pregnancy Resource Centers Fight For Life Amidst Opposition
This World is Not Our Home
Lessons Learned From a Gingerbread House
Let There Be Peace on Earth
‘I Wanna Dance’ movie: Whitney Houston’s success and...
Fact Finding, Sight Seeing, and Prayer Walking
Kidney donation led to 8 life-saving surgeries
Home ANS Reports Christian families from tribal communities in India attacked by mob

New Malden, England (ANS) – Christian families belonging to the Scheduled Tribe community located in five villages in Kondagaon District, Chhattisgarh in India had their homes ransacked and farmland and property destroyed by a large mob in attacks which took place over two days from 22-23 September, according to CSW.  The Christians had declined to donate money towards a local Hindu festival in the days beforehand. 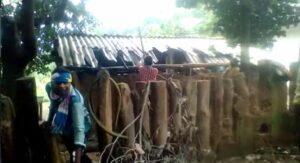 Members of the mob damage a home in one of the villages. Credit: CSW

On two occasions, a mob of approximately 300 people ransacked the homes of the Christian families in the villages of Kakerbeda, Silati, Jondrabeda, Singhanpur and Tiliabeda, destroying their possessions. A fishpond used for harvesting fish which belonged to one of the victims was looted, and the families’ rice fields and fruit trees were plundered. At least fifty Christians have been affected by the attacks.

According to the Kondagaon daily newspaper ‘Daink Bhaskar,’ the Superintendent of Police of the district denied that the attacks took place and claimed that no houses were damaged.

Local sources say that a few days prior to the attacks the families were asked to make donations towards a Hindu festival. When the families declined to contribute, their personal details were recorded by those who had asked for the donations. The families were then forced to sign on a document that they agreed to leave their Christian belief, which they refused to do. According to one 28-year-old Christian woman, perpetrators also attempted to rape one woman on the night of 24 September.

When the affected families tried to register a First Information Report (FIR), which is required for the police to open up an investigation, the police refused to register their complaints and encouraged them to withdraw their grievance and seek a compromise settlement with their attackers. The police had also advised the families to forsake Christianity and assured them that compensation would be given to rebuild their homes in return. The families continue to live in their damaged houses in each of the villages.

Arun Pannalal, President of Chhattisgarh Christian Forum said: “This is a deliberate targeted attack on the minority Christian families belonging to the tribal community. The authorities have dismissed the attacks as being religiously motivated. The cries for justice and suffering of these families are not being heard. The BJP has been empowering thugs to carry out these attacks with impunity for a long time in the state. In the last ten months, we have recorded 11 vicious attacks on the Christians. In one such incident in a tribal village; a widow and her two children were reading the Bible in her own house. They were approached by some people who forced them to participate in prayers to honour a Hindu deity. When the widow refused, the men kidnapped her and took her to a forest, where they held her captive for seven days, during which time she was raped and subsequently murdered. There has been no investigation or arrests, yet. This is the level of evil these fundamentalists are willing to do and they have the backing and protection of the authorities. The Prime Minister’s office must take cognizance of these cruel attacks and do something about it.”

CSW’s Founder President Mervyn Thomas said: “CSW is deeply concerned for the safety and well-being of these families who have been intentionally targeted because they chose to practice their faith. Members of Scheduled Tribes in India are usually not Hindus; instead they practice their traditional religions. They should be free to exercise their right to choose a different religion, such as Christianity, without fear of retribution, as is their right under the Indian constitution. We call on the government of India to uphold the right to freedom of religion or belief for all Indians and urge the Chhattisgarh authorities to enforce the rule of law and prevent similar attacks from threatening the ability of these communities to exercise this fundamental freedom.”