Top Posts
Knowing the One Who Always Keeps His Word
Pregnancy Resource Centers Fight For Life Amidst Opposition
This World is Not Our Home
Lessons Learned From a Gingerbread House
Let There Be Peace on Earth
‘I Wanna Dance’ movie: Whitney Houston’s success and...
Fact Finding, Sight Seeing, and Prayer Walking
Kidney donation led to 8 life-saving surgeries
The Power of Curiosity
When Love Came Down at Christmas
Home World MissionsPersecution Christian TV reporter attacked on assignment

CUCUTA, COLOMBIA – Christian TV reporter Chuck Holton is a former Army Ranger and a CBN News contributing correspondent who was attacked while on assignment for CBNNews in Venezuela.

Holton said: “As I was filming along the riverbank, I was attacked by three men who tried to drag me into Venezuela. There were several signs that these attackers were tied to the regime – for example, they were smoking cigarettes, which most Venezuelans can’t afford since they’re struggling to survive. 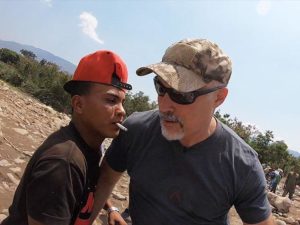 Holton is seen in this photo trying to evade his attacker

“While my camera was broken in the confrontation, I was able to get away from my attackers and they fled back across the river. But it was a powerful lesson in how Maduro’s brutal regime uses its power against these people every day.”

He said: “The lights are starting to come back on in parts of Caracas – Venezuela’s capital. But the extended power outage and ongoing food crisis have sent a tidal wave of humanity fleeing the country to neighboring Brazil and Colombia.”

In the border town of Cucuta, thugs paid by Venezuelan Dictator Nicholas Maduro’s regime are targeting people for robbery and kidnapping.

“As the US embassy pulled its remaining personnel out of Caracas on Tuesday, (I) went back to the border where aid shipments were burned by Venezuelan troops two weeks ago.

“The border between Venezuela and Colombia is now officially closed. The bridge that had tens of thousands of people crossing it when I was here two weeks ago is now essentially empty. 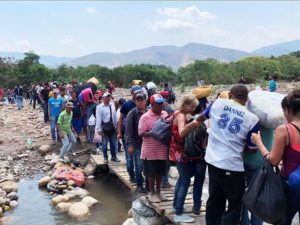 Refugees are finding new ways to cross the border

“(Now) these refugees are finding new ways to cross the border, risking everything to cross in difficult locations. We observed hundreds making a water-crossing.”

But crossing illegally is fraught with risk, he said. “These people say they are preyed upon by members of criminal biker gangs called Colectivos, who support Nicolas Maduro, and charge a fee or even rob people trying to get across. And they aren’t exaggerating.”

Please remember to pray for the safety of CBN News correspondents on assignment around the world.