Top Posts
Johnny Cash movie: His life, loves, challenges and...
A Walk of Faith Begins with a Step...
God is Rich in Mercy
Everyone has a Story to Share
‘Till’ movie: Racial murder helped spark civil rights...
Leaning His Head On Jesus, This Evangelist Hears...
Timing, common ground, and fruitfulness in witness
Step Out of the Traffic
In Support of Ukraine
Living an Imperfect, Unfinished Life
Home World MissionsPersecution Pakistani Christian woman appeals for justice

Naveed Iqbal, Saima Iqbal’s husband, states in the video: “Are we going through this all because we are Christians”? 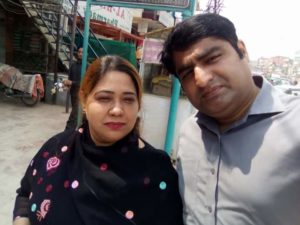 “My name is Naveed Iqbal. A few days ago I had uploaded a video [on social media]. It was about the injustice that has been done to me. The mother of my children was forcibly kidnapped on the 25th of February 2019. The police delayed registering First Information Report (FIR). The FIR was lodged on the 1st of March. The police deliberately delayed registering an FIR as they were in collusion with the accused.”

Naveed continued: “On the 5th of March my wife was recovered from the accused. We were told that my wife, Saima Iqbal, has converted to Islam on her own volition.

“We are still receiving threats. We are at an undisclosed location. We are in hiding. I am in hiding with my children and my wife. They have presented my wife before Commissioner, and got her to make a statement under duress. We have approached many people in high places to get my wife recovered. Please look at her. She is Saima Iqbal, the mother of my children. She was moved to a government-run safe home without getting her medical done. Sati told the management of the government-run safe home that my wife is Muslim now, therefore, nobody should be allowed to meet her. I would like you to hear from Saima herself. The accused is looking for us to inflict harm to us.”

Neveed’s wife, Saima Iqbal, says on the video: “On the evening of the 25th of February, when my husband was leaving for work he [Sati, the accused] was standing in the street. One of my sons went out I went to get him back. Sati began beating me up and took me to his house.”

“Look at the torture marks on her. Saima, it is time to share [with the world] what you went through. Is it our fault that we are Christians? Naveed Iqbal said.

Saima Iqbal continued: “Next day, Sati subjected me to torture and forced me to convert to Islam. He threatened me to cause harm to myself, my aunt and my relatives. Take a look at my torture marks. I have torture marks on other parts of my body. Can’t expose them to you. I have been exposed enough.”

Naveed Iqbal stated: “I have previously requested Imran Khan, Prime Minister of Pakistan, to help us get justice. Will we get justice? My wife has gone through trauma. It took us two days to get her back to normal. Please give us justice. Give us a safe home. The next hearing is on the 19th of February. I urge Christian and Muslims to please come in the court. I would like to see how many people turn up to show their concern for us on the next court hearing. We need justice.

Sheraz Khan, Chief Executive of International Minorities Concern, a UK-based advocacy group for minority rights, said: “How long such gross human rights violations will continue to happen against Christians and other religious minorities of Pakistan?