Top Posts
Knowing the One Who Always Keeps His Word
Pregnancy Resource Centers Fight For Life Amidst Opposition
This World is Not Our Home
Lessons Learned From a Gingerbread House
Let There Be Peace on Earth
‘I Wanna Dance’ movie: Whitney Houston’s success and...
Fact Finding, Sight Seeing, and Prayer Walking
Kidney donation led to 8 life-saving surgeries
The Power of Curiosity
When Love Came Down at Christmas
Home ANS Feature Martin Luther King and Coretta Scott King’s ‘Dream’

52 years ago the Reverend Martin Luther King, Jr. was assassinated April 4, 1968. This story is by ANS Founder Dan Wooding and his interview with the amazing Coretta Scott King.

LONDON, UK (ANS – January 21, 2019) – The annual “Martin Luther King Jr. Day” always brings memories flooding back to me. For, you see, back in 1969, one of my earliest interviews as a journalist with Billy Graham’s then London-based newspaper, The Christian, which at the time was the oldest Evangelical newspaper in the world, was with Coretta Scott King. 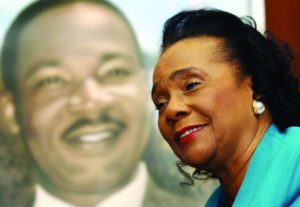 Coretta Scott King with picture of her husband

The experience took place on March 17, 1969, just under a year after the assassination of her husband on April 4, 1968, when Dr. King was cut down by a bullet from the gun of James Earl Ray, as he was standing on the balcony of the Lorraine Motel in Memphis, Tennessee.

When I arrived at the newspaper’s offices in Camden Town, London, that morning, I thought it was going to be just another day of re-writes, but before I could sit down at my desk, the Scottish-born editor. Dr. J.D. (Jim) Douglas, called me into his office and asked me to sit down. My heart sunk as I feared that maybe he was going to tell me that my reporting wasn’t “up to scratch”, or even worse, that he was “letting me go.”

The Surprise of My Life

But then I got the surprise of my life when he locked eyes on mine and said, “Dan, I’ve arranged for you to interview Coretta Scott King, the widow of Dr. King at St. Paul’s Cathedral. She’s going to speak at her late husband’s memorial service there later today. Can you go over to the quarters of Canon John Collins right away, as he is hosting Mrs. King?”

Dr. Douglas also told me that Mrs. King was to be the first woman to have ever been allowed to deliver a sermon at a regularly appointed service in the cathedral and then waved me off with, “Don’t let me down, Dan. This is going to be one of the biggest interviews you’ve ever done.”

In a bit of daze, I thanked him for putting his trust in me, stepped outside and hailed a black London taxi cab and, after about 20 minutes, the driver, who had had skillfully weaved his way through the heavy London traffic, dropped me off at the front of the imposing Anglican Cathedral and I inquired from a staff member where Canon Collins residence was located.

Coretta plays piano for her children

He took me to his quarters and I soon realized that he was just the person to be hosting Mrs. King, as he had been an activist Canon of St. Paul’s Cathedral for many years, and was a huge supporter of non-violence and a member of the Anglican Pacifist Fellowship.

Now it was time to meet this extraordinary woman, who had suffered so much at her late husband’s side. As she spotted me, she came over, smiled, shook my hand, and thanked me for coming.

To try and ease the situation, I made her smile, when I told her of my own African roots, having been born in Nigeria, West Africa, of British missionary parents, Alfred and Anne Wooding.

“So we already have a lot in common,” she said. “Please sit down.”

As I watched her four children scamper around the house — just like any other children of their age — I tried to imagine the pain they must all have been through.

I looked at Mrs. King and asked if she was worried about suffering the same fate as her husband.

“I have lived with the threat so long now I hardly think about it,” she said, her eyes ablaze. “I must do what I must do!”

She glanced across the room at her four children, and added, “My children are with me in this.”

She Recounts the Historic March From Selma to Montgomery

We talked for about half-an-hour as she shared with me about the great love that she and Martin had shared over their many years together, and then detailed the many campaigns they had shared together, especially when in early 1965, Martin Luther King Jr.’s Southern Christian Leadership Conference (SCLC) made Selma, Alabama, the focus of its efforts to register black voters in the South. 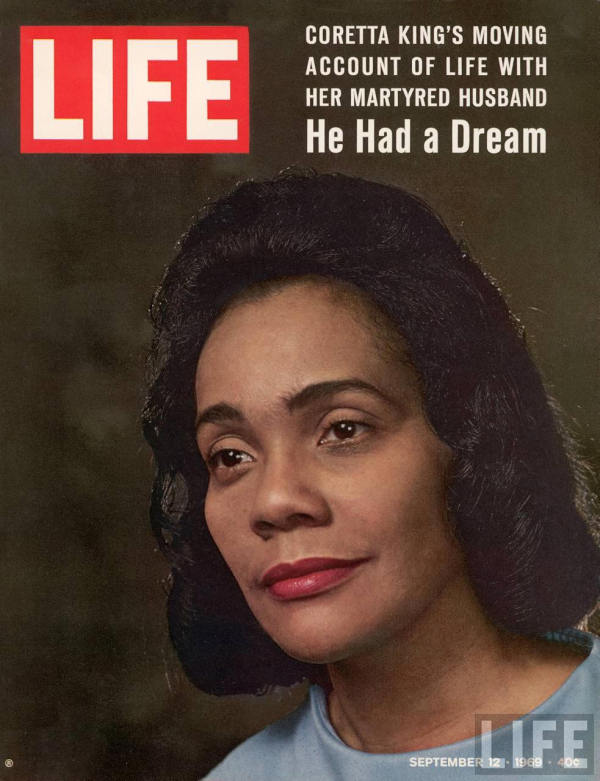 “We were attempting to march from Selma to the state capital of Montgomery were met with violent resistance by state and local authorities,” she went onto say.

Even as a relatively young man, I well remember that, as the world watched, the protesters (under the protection of federalized National Guard troops) finally achieved their goal, walking around the clock for three days to reach Montgomery. The historic march, and King’s participation in it, greatly helped raise awareness of the difficulty faced by black voters in the South, and the need for a Voting Rights Act, passed later that year.

Then her eyes lit up when she talked about that day on August 28, 1963, when Dr. King delivered his famous “I Have a Dream” iconic speech to a massive group of civil rights marchers gathered around the Lincoln Memorial in Washington DC.

I just couldn’t get enough of this fascinating American civil rights history lesson, when Canon Collins intervened and told me that it was time to end the interview.

But for me, it wasn’t all over as, not long afterward, I watched as Mrs. King climbed up to the same carved pulpit in the historic St. Paul’s Cathedral, where her husband had preached five years earlier.

“Many people despair at all the evil and unrest and disorder in the world today,” she said from the pulpit to the packed cathedral, “but I see a new social order and I see the dawn of a new day.”

Mrs. King continued with the work of her late husband until her death on January 30, 2006, at the age of 78. She worked tirelessly for racial equality after he was assassinated and fought successfully for a national holiday in memory of him. She also founded The King Center in Atlanta to preserve his legacy.

Speaking in 2003 on the 40th anniversary of her husband’s best-known speech, Mrs. King urged the crowds to follow the peaceful path he preached.

Just like her late husband, she also had a dream! Although they have both left us, long may their vision continue! We need it more than ever these days, with so much racial division and anger that never seems to go away.

On behalf of myself, and so many others, I would like to record my thanks to both Dr. King and Coretta, for pointing the way for us, and my hope and prayer is that, on this holiday, many will heed their important message of love and reconciliation.