Top Posts
Knowing the One Who Always Keeps His Word
Pregnancy Resource Centers Fight For Life Amidst Opposition
This World is Not Our Home
Lessons Learned From a Gingerbread House
Let There Be Peace on Earth
‘I Wanna Dance’ movie: Whitney Houston’s success and...
Fact Finding, Sight Seeing, and Prayer Walking
Kidney donation led to 8 life-saving surgeries
The Power of Curiosity
When Love Came Down at Christmas
Home ANS Feature Remembering Dad – A Tribute to ANS Founder Dan Wooding

Sheffield, England (ANS) – Andrew Wooding, who works for Church Army in the North of England and is the elder son of ANS Founder Dan Wooding shares these memories of dad. 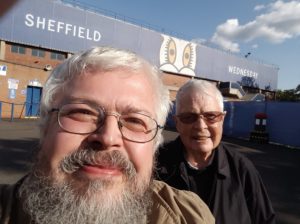 Andrew and Dan in Sheffield

Since Dad died more than two weeks ago, we’ve been overwhelmed by the tributes that have been flooding in. More than 500 alone on our Facebook announcement. This includes many people we didn’t know of, but obviously Dad had encouraged them along the way.

I made a note of some of the words and phrases that kept cropping up: an inspiration, a mentor, a media pioneer, passionate and fearless, he leaves a great legacy, gentle, generous, a great sense of humour. Dad was a voice for the voiceless, especially Christians trying to live out their faith in countries where they are persecuted. This was his main passion.

In many ways Dad and I were opposites. I’m an introvert; he was more outgoing. I like to stand back and observe; he liked to get stuck in. I write fiction and spend ages agonizing over each word; Dad was a tabloid journalist who could churn out as many column inches as needed at great speed.

But let’s not focus on the opposites. They say your parents live on through their children, so this is just a little of how Dad lives on in me.

My childhood bedroom doubled as Dad’s office at home. So I grew up loving typewriters, the smoothness of carbon copy paper, and the smell of yellowing newspapers. I used to type up his interviews and edit his stories. So Dad built into me the compulsion that whenever I see a blank sheet of paper, I have to fill it up with words. We were both into telling stories, except his were mostly true.

Dad took an interest in my music. He would listen to my Stranglers LPs and sometimes say nice things about them. As a journalist, he would be given review copies of albums by the truckload, so half of my bedroom wall was filled – floor to ceiling – with shelves bulging with vinyl. And he took us to concerts. Some of them freebies to do with his job. So Dad built into me a love of performance, of seeing a band live and in the moment. To this day I am not happy unless I have tickets for the next concert I’m going to.

Dad would talk to anyone, no matter what their status, or lack of status. No matter what skin colour, where they came from, whatever their background. And he wasn’t scared of authority. He would go straight to the top of any organisation if he needed to speak his mind or ask a favour. Dad would take us to celebrities’ houses, and I learned very quickly that the people we see on TV screens are just ordinary flesh and blood mortals with issues and personality quirks of their own. Dad built this into me. I see everyone as of equal worth, and I’ll talk to anyone.

That’s just three headings, and there’s so much more I could say. But maybe I could finish with some memories of his last two years in England when we could see each other more and make up for lost time. 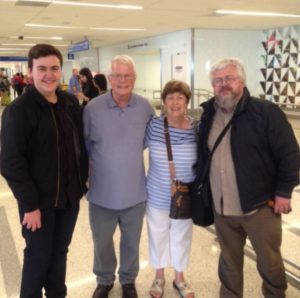 There’s a song by the band Yes called Footprints. The main message is clear: leave good footprints behind. Dad has definitely done this. Footprints in thousands of people’s lives, many of whom we’ll never know. And literal footprints in just about every country in the world. He loved his travelling.

It is obvious from the recent tributes just how many people have followed in his footprints after being inspired or encouraged by him. And many are making footprints of their own.

There was the great news yesterday that my brother, Peter, is going to keep Dad’s long-running Assist News Service going by becoming the Senior Editor. Peter is also a PR man and a Christian video journalist. So Dad’s work lives on!

Dad himself is living on but not in his body, released from the pain that dogged him the last few months of his life. He is free now and happy. Cheers, Dad, for everything. You did good, and now you can enjoy your well-earned rest. We definitely won’t forget you.