Top Posts
Knowing the One Who Always Keeps His Word
Pregnancy Resource Centers Fight For Life Amidst Opposition
This World is Not Our Home
Lessons Learned From a Gingerbread House
Let There Be Peace on Earth
‘I Wanna Dance’ movie: Whitney Houston’s success and...
Fact Finding, Sight Seeing, and Prayer Walking
Kidney donation led to 8 life-saving surgeries
The Power of Curiosity
When Love Came Down at Christmas
Home World MissionsPersecution CSW Welcomes Sudan Government’s Pledge to End Death Penalty for Apostasy

Christian Solidarity Worldwide has welcomed a statement by a member of the transitional government of Sudan in which he claimed Sudan would be removing the death penalty for apostasy.

According to a CSW press release, on 8 March Mohamed Hassan Arabi, a member of the Forces for Freedom and Change 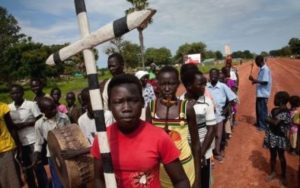 Sudanese Christians bravely carry the cross as a witness

(FFC) Coordination Council, told the Sudan Tribune that the death penalty would be removed under the Miscellaneous Amendments Bill of 2020 and replaced with a disposition making it a criminal offence to accuse someone of apostasy.

CSW went on to report that article 126 of Sudan’s 1991 Criminal Code stipulates that those found guilty of apostasy are to be sentenced to death. The article has historically been used to target religious minorities and restrict freedom of expression. In May 2014 Meriam Ibrahim was sentenced to death by hanging for apostasy by the Public Order Court in El Haj Yousif, Khartoum. A court of appeal overturned the original ruling in June 2014.

The Criminal Code also contains several other provisions which limit personal freedoms and criminalise blasphemy. There was no indication that these aspects of the Criminal Code were due to be repealed.

CSW’s Chief Executive Mervyn Thomas said: “We welcome the Sudanese government’s pledge to remove the death penalty for apostasy, and to criminalise those who make apostasy accusations.  If enacted, it will be an important step towards protecting freedom of religion or belief. However, we remain concerned that the crime of apostasy will remain in the Criminal Code, alongside article 125, which criminalises blasphemy.  CSW continues to call on Sudan to repeal all legislation that prevents the full enjoyment by every citizen of the fundamental right to freedom of religion or belief. We encourage the government to take further steps to ensure that Sudanese citizens of all faiths and none are free to practise their beliefs in accordance with international law and standards.”

The commitments by the transitional government followed a country visit from two commissioners from the United States Commission for International Religious Freedom (USICRF) from 26 February to 1 March. During their visit USCIRF Chair Tony Perkins and Commissioner Anurima Bhargava urged the transitional government to formally repeal article 126. The commissioners also recognised the challenge of turning the renewed optimism into tangible and meaningful religious freedom reforms.

CSW says these developments come weeks after three churches in Blue Nile State were attacked twice in three weeks. The Sudan Internal Church, the Catholic Church and the Orthodox Church in Bout Town, Blue Nile state, were attacked on 28 December 2019 and again on 16 January. Despite assurances from the Federal and State government that the churches would be rebuilt and perpetrators of the attacks would be brought to justice, the churches are still waiting for a resolution. Local sources report that the government has offered the churches the equivalent of US$900 compensation to assist with rebuilding their places of worship.

The Mission Field of Markets, Malls and Medical Centers