Top Posts
A Walk of Faith Begins with a Step...
God is Rich in Mercy
Everyone has a Story to Share
‘Till’ movie: Racial murder helped spark civil rights...
Leaning His Head On Jesus, This Evangelist Hears...
Timing, common ground, and fruitfulness in witness
Step Out of the Traffic
In Support of Ukraine
Living an Imperfect, Unfinished Life
‘Nothing is Impossible’ movie: Hoops, romance, second chances
Home World Missions East Ukraine’s unsung heroes of the faith

At the height of the conflict in East Ukraine in May 2014, UNHCR paramedic Evgeniy Tkachov was imprisoned by Russian separatists while risking his life to rescue the injured and get them to safety.

Since the war began Christian charity Mercy Projects has supported many dedicated Christians like Evgeniy who are willing to lay their lives on the line.  On a recent reporting trip to this troubled region I met Evgeniy along with many other incredible believers still serving the Lord in this conflict zone. 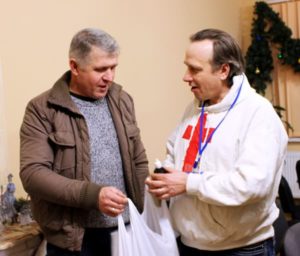 As we entered the Word of Life church in Chasov Yar, where Evgeniy has been based as a volunteer UNHCR paramedic since the conflict in East Ukraine began, I was instantly struck by his gentle and friendly nature.  He is grateful for the medical supplies we have brought for him as he continues to care for victims of the war. For someone who had been imprisoned twice by Russian separatists he remains very modest about his remarkable story.

“The first time I was captured was in May 2014 in Slovyansk. It was occupied during this time and we brought humanitarian aid and took ill people who couldn’t move themselves. It had been lasting about 6 weeks and then these separatist soldiers said it’s enough.  They took our cars and said we weren’t allowed to take away these ill people.  So, they punished me by putting me in jail for 15 days and then they found a Bible in my car and they said I was an American spy.  They said if you are a Christian or a spy it’s not possible to change people so you should be killed.”

Then Evgeniy nonchalantly describes the miracle of what took place next:

“On the third day we somehow escaped.  It was like the book of Acts when an angel opened the doors of the prison cell.  We can laugh now but it was very dangerous and very serious. It was a miracle but I’m just grateful that God continues to equip me to continue this ministry.”

Vadim Vero has served as the Pastor of Word of Life Church in Dobropillya for the past 20 years.  This tough-looking 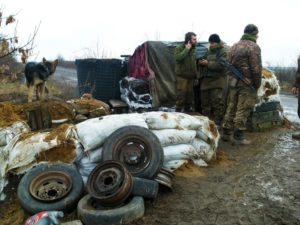 Pastor Vadim and Sergei minister regularly to soldiers at checkpoints and near the frontlines.

Greek/Ukrainian looks more like a boxer than a typical pastor.  But his passion for caring for people is infectious as he greets me with a strong bear hug.

“At the beginning of the war God called us to minister to the military when they came to our town of Dobropillya,” explains Vadim.

“It was a very difficult year for our army. They didn’t even have uniforms or much food. Our church collected money and even clothes and gave them to the soldiers.

“Because we were there right from the beginning we continue to have a good relationship with some of the military and they are very open to the Gospel. You need to be near them very closely and it can help them to open their hearts.”

When Donetsk came under siege Sergey Kazmenko and his wife and children were forced to flee to Dobropillya, where they now serve alongside Pastor Vadim ministering to other displaced families like themselves as well as the soldiers.

This softly spoken pastor who lost everything tells me people need to realise this crisis continues today.

“For people who live close to the front lines it is a very traumatising situation. People who live in the middle of the country or in the Western part, they don’t notice. Some of them don’t think about how the war is lasting.

“For people who are closer it’s very difficult to leave and it’s very serious.

“As we continue to take aid supplies to many displaced families and the military they are inspired to hear that we were impacted ourselves by the war.

“They are impressed because we live in the Donetsk region very closely to the front lines and we helped them with their needs. And it’s very important for them to communicate that we take care of our attitude to them.  It’s more important to them than the things we bring.” 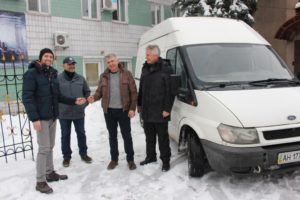 A new van for ministry in East Ukraine

van to get him around.  However, after spending countless hours driving through almost impassable roads through the harsh winter months this van finally came to the end of it’s use recently.

While we were visiting with Sergey we were able to give him a gift from Mercy Projects to enable him to buy a much newer van which he proudly showed us when we met at their church.

With a huge smile on his face he told us: “We are very impressed that Mercy Projects was so open to help us. We even couldn’t imagine our big problem could be solved so quickly. I’m so thankful for this help. Mercy Projects has helped us many times over the years with every need that we had.”

Young People Are Leaving the Church In Record Numbers