Top Posts
Knowing the One Who Always Keeps His Word
Pregnancy Resource Centers Fight For Life Amidst Opposition
This World is Not Our Home
Lessons Learned From a Gingerbread House
Let There Be Peace on Earth
‘I Wanna Dance’ movie: Whitney Houston’s success and...
Fact Finding, Sight Seeing, and Prayer Walking
Kidney donation led to 8 life-saving surgeries
The Power of Curiosity
When Love Came Down at Christmas
Home World MissionsPersecution Eight wounded in Islamic State car bombing

QAMISHLI, SYRIA (ANS) — Islamic State (IS) claimed responsibility for detonating a car bomb in front of a church in north-east Syria on July 11, according to BarnabasAid.

Reports said at least eight people were injured in the blast in the city of Qamishli, which is held by the Kurdish YPG militia. 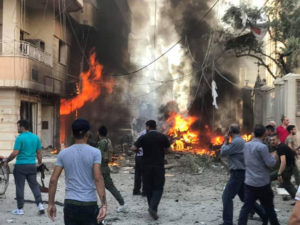 Fires broke out after Islamic State detonated a car bomb outside the church in Qamishli, Syria

Fires broke out after Islamic State detonated a car bomb outside the church in Qamishli, Syria.

Earlier that day, a bomb killed 11 civilians, including children, in the Syrian city of Afrin, on the border with Turkey. Many others were wounded, some seriously, in the explosion at an entrance to the city.

One report said the bomb was planted in a diesel fuel tanker left in a residential area of Afrin and that many homes were damaged in the explosion and subsequent fire.

Afrin, which is north of the capital Aleppo, was held by the Kurdish YPG until 2018 when it was seized by Turkish-backed militia.

Reuters news agency reported the car bomb killed 11 people and wounded many others on Thursday (Juky 11) in the Syrian city of Afrin, which Turkey-backed rebels captured from Kurdish fighters last year, medical sources and a monitor said.

The blast struck an entrance to the city, killing civilians including children, the UK-based Syrian Observatory for Human Rights war monitoring group said.

The Observatory and the medical sources said many other people had been injured in the explosion, some very badly.

Afrin lies north of Aleppo near the border with Turkey. It was held by the Kurdish YPG militia until last year when rebels seized it and the countryside around it in a Turkey-backed offensive.

Later in the afternoon, a car bomb exploded in front of a church in the northeast city of Qamishli, which the YPG controls, injuring 8 people, local security forces said.

Reuters stated that while major fighting has died down for now, there is still much insecurity in many parts of Syria, with bombings and other attacks targeting civilians in areas controlled by all sides in the conflict.

In June, a car bomb in Azaz, a town near Afrin also controlled by Turkey-backed rebels, killed at least 10 people when it struck in a busy marketplace on a Ramadan night.