Top Posts
Knowing the One Who Always Keeps His Word
Pregnancy Resource Centers Fight For Life Amidst Opposition
This World is Not Our Home
Lessons Learned From a Gingerbread House
Let There Be Peace on Earth
‘I Wanna Dance’ movie: Whitney Houston’s success and...
Fact Finding, Sight Seeing, and Prayer Walking
Kidney donation led to 8 life-saving surgeries
The Power of Curiosity
When Love Came Down at Christmas
Home ANS Feature Escape From Kyiv

From our friends at World Magazine (wng.org) and Mission Eurasia (missioneurasia.org) – Nadia Matviichuk’s husband shook her awake at 6 a.m. on Thursday in their home in Kyiv, Ukraine. Russia had invaded, he said. She needed to pack so they could be prepared to leave. Her friend, a police officer, messaged her saying, it’s serious—Russia has really invaded. Nadia, a translator for the Kyiv-based Christian nonprofit Mission Eurasia, felt panic coming on; she wanted to get out as soon as possible. She woke her daughters, who are 16 and 12, and told them to start packing. She started throwing things in her suitcase as her husband packed their documents into a little bag. He questioned whether they should wait and see how things develop. 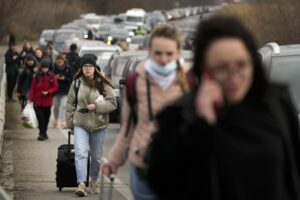 “No, no. We have to go!” Nadia said. An hour later, they were throwing their suitcases into their small black SUV. They could hear bombs and shots in the distance. Nadia didn’t think this would ever happen to them. She was leaving her home, a small, one-story house with a giant fireplace in the middle built in 1956 that she and her husband had restored. She didn’t know if it would still be there when she went back—or if she’d get to go back. They got out of the city, and she finally let her breath out. She hadn’t brushed her teeth or her hair. She didn’t know what was in her suitcase.

Thursday morning, Russian forces began advancing into Ukraine after building up a military force 150,000 strong along the country’s borders. Artillery descended from the north, east, and south. Russian President Vladimir Putin said he would not attack the cities. But after several days of fighting at key military and government installations, skirmishes began on the outskirts of the capital of Kyiv. Ukrainian President Volodymyr Zelenskyy warned residents who had not already evacuated to stay inside and prepare for fighting in the streets.

Many residents of Kyiv, like Nadia and her family, left when the invasion began. Early Thursday, vehicles clogged the roads to the western city of Lviv. Nadia and her family set out for the Polish border. Once on the road, they called her husband’s uncle and asked if he wanted to come with them. He doesn’t have any family except for them and lived in a city on their way. At first he said no, but after he watched the news for a few hours, he called.

They stopped, packed him into the SUV, and kept going with him in the front seat with Nadia’s husband and Nadia and her daughters in the back. Her youngest had been hugging her the whole time. They kept saying they were scared and wanted to get to Poland.

A few hours later, they got close to the border. Cars were backed up almost seven miles. Nadia realized she didn’t pack any books. What were they going to do with their time when they got to Poland?

Four hours passed. No bathroom breaks. It was getting dark. They were listening to the radio when the newscaster said men ages 18 through 60 were not allowed to leave Ukraine.

Nadia looked at her husband and his uncle. She looked at her daughters. The traffic was still stopped. They saw women and children getting out of their cars and walking to the border with suitcases while the men in the vehicles turned back and headed home. Nadia and her family sat there a while longer. Her friends called and said it wasn’t worth trying to cross the border. Nadia felt sick to her stomach.

Nadia and her family decided to head toward Western Ukraine. She has relatives there. Her plan is to stay there, maybe hide in the western mountains. As of Saturday, nearly 120,000 Ukrainians had left the country for Poland, Moldova, and other neighboring nations, according to the UN. Authorities in those countries mobilized to receive the Ukrainians, providing shelter, food, and legal help. They also eased their usual border procedures, including COVID-19 testing requirements.

Sergey Rakhuba, president of Mission Eurasia where Nadia works, said his organization originally planned to move most of its staff to Moldova, where it has a ministry hub, in the event of an invasion. Six ministry workers would remain in Ukraine to help coordinate food and medical relief distribution. When I talked to him Saturday, he said that many workers had crossed the Moldovan border once it reopened, but six families decided to go to a safe place in western Ukraine after martial law had been instituted and their husbands were not able to leave the country. The families started one of the first Christian-led refugee centers in Ukraine. Mission Eurasia has also set up a refugee center in Moldova, and they are trying to prepare to serve some millions of refugees as the war continues. There are still some ministry workers within Ukraine’s cities hiding in basements and bomb shelters, he said. Though the internet is down in some places, he’s still getting the occasional text with updates.

As of Saturday, Nadia and her family were safe, and she was coordinating communications for the ministry, Rakhuba said. For their protection, WORLD agreed not to share the names of Nadia’s family members or details of where they are now.

As she drove away from the border on Thursday, the only thing Nadia remembered putting in her suitcase was her Bible. It was dark. If Russia took over Ukraine, she said, she said did not want to go home. “I’d rather start my life over from scratch than live under tyranny like that,” she said.

Plant a Seed and Watch God Make It Grow