Top Posts
Knowing the One Who Always Keeps His Word
Pregnancy Resource Centers Fight For Life Amidst Opposition
This World is Not Our Home
Lessons Learned From a Gingerbread House
Let There Be Peace on Earth
‘I Wanna Dance’ movie: Whitney Houston’s success and...
Fact Finding, Sight Seeing, and Prayer Walking
Kidney donation led to 8 life-saving surgeries
The Power of Curiosity
When Love Came Down at Christmas
Home ANS Feature Eugene Peterson spoke to ‘angels’ as he slipped away

Eugene Peterson spoke to ‘angels’ as he slipped away

Influential theologian and pastor Eugene Peterson, author of The Message, passed to his heavenly reward on the 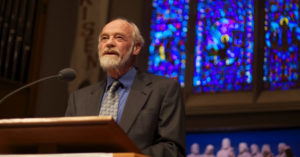 morning of October 22nd, but not without an encounter with heaven immediately before his home-going.

On October 9th Peterson was admitted to the hospital as the result of an infection. Previously, heart disease and dementia had caused a steady decline in his health. The infection complicated his condition and one week ago it was announced that he had been placed on hospice care.

The family released a statement about the moments immediately preceding his passing, which seem to indicate “the veil” between this life and the next was pulled back, beckoning the great scholar home.

“During the previous days, it was apparent that he was navigating the thin and sacred space between earth and heaven,” they noted.

His family witnessed a remarkable exchange! “We overheard him speaking to people we can only presume were welcoming him into paradise. There may have even been a time or two when he accessed his Pentecostal roots and spoke in tongues as well.”

Among his last words were, “Let’s go,” which suggest his anticipation and perhaps a glimpse of the beauty and eternal delight set before him.

His countenance radiated that expectancy. “And his joy: my, oh my; the man remained joyful right up to his blessed end, smiling frequently.”

The family were hushed by the reverential moment of his passing. “In such moments it’s best for all mortal flesh to keep silence. But if you have to say something say this: ‘Holy, Holy, Holy.’”