London, England (ANS) – It was the most terrifying moment of my life. Dan Wooding and I were meeting the parents of the Kray Twins, Britain’s most notorious gangsters. 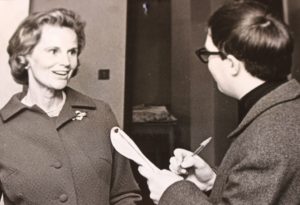 The “boys”, Ronnie and Reggie, were serving life sentences for their part in murders, armed robberies and protection rackets.

But bizarrely, before their arrests in 1968, they had become celebrities, mixing with top entertainers including Frank Sinatra and Judy Garland in London’s “Swinging Sixties”.

In the mid-1970s Dan was an up-and-coming journalist and had asked me – a friend and colleague – to work with him on an exclusive interview with their elderly parents, Violet and Charlie, for a top Sunday newspaper.

Dan did most of the leg-work, but thought he might need a bit of protection – not that I could have provided any – on this trip to a rather dangerous part of the capital’s East End.

The old couple turned out to be utterly charming and provided us with endless cups of tea. All was going well, and we were chatting about their former priest, who was Dan’s contact for the story.

Suddenly there was a thunderous, repeated knocking at the front door. Dan and I looked at each other and froze.

But the Krays didn’t seem too bothered. And we soon found out why. It wasn’t a police squad at the door, or a rival gang. It was just a man collecting money for the football pools – a hugely popular betting system based on predicting each Saturday’s soccer results.

We breathed again. And looking back on my friendship with Dan, that just about sums it up. You never quite knew what to expect.

We met at a newspaper in Ealing, a prosperous suburb of West London, and hit it off immediately, probably because of our mutual weird sense of humour.

Fortunately for me, his writing needed a bit of polishing, and that’s how I got involved. The local paper didn’t pay well and Dan had a family to keep, so he sold stories to the big national papers, while writing books about his Christian work, supporting oppressed people around the world.

Some of the books we worked on weren’t quite as serious, though – particularly the one about Rick Wakeman, a local boy who became a top keyboard player and was a member of the hugely successful group Yes as well as carving out a solo career.

By that time, Dan was pursuing a rather unlikely career at a top-selling national tabloid newspaper. I say “unlikely” because it had few of Dan’s values and its culture was hard-drinking, long hours and not caring how many people it upset.

Leaving that world was the best thing Dan ever did.

Meanwhile I was working at a paper in Oxford – the next step up the Fleet Street ladder – and getting married.

Dan probably played a part in that marriage too. While my future wife, Jayne, was no doubt impressed by my charm and good looks, what may have impressed her just as much was the Alfa Romeo sports car that I was able to buy with my share of the money from the Kray articles.

1979 was a year to remember for both of us – especially Dan. He recommitted his life to the Lord, quit his job and travelled to Uganda, where the brutal President Idi Amin had fled, leaving his country in ruins.

Dan and his old friend Ray Barnett travelled to Africa to document the horrors experienced by local believers, and produced a book called Uganda Holocaust. They wanted someone to edit it, but didn’t have much money, so they naturally turned to me!

In 1982 he and Norma settled in California. By then I had taken a job in Fleet Street, one which I kept for 29 years.

It’s been difficult to keep in touch, as we were usually an ocean and a continent apart, but we had the sort of friendship where we could pick up a conversation instantly.

And thanks to the internet, I was able to follow Dan’s TV and radio shows, hearing his fascinating guests and keeping up with what his children and grandchildren were doing and even “meeting” his sister, Ruth, on air.

I’ve had an interesting and rewarding career. I’ve visited quite a few countries, helped to train many of the top young journalists in the UK, been involved in a world exclusive, breaking the news of Princess Diana’s death, been presented to the Queen (I believe that is the correct term) and met several prime ministers.

But The Life of Dan – if you’ll allow me to steal that title – was described by bestselling author Pastor Rick Warren as “one of the most amazing and exciting you could ever imagine”.  I can’t beat that as a tribute.

Despite all the suffering he saw and the hard work he put in, he never changed at all. And he still had that crazy sense of humour.

I believe that over the years, you meet a small number of really good people whom you can respect, and some of them change your life. Dan was very high on my list.

About Mike Watson: He started his journalistic career as a reporter at the Middlesex County Times in Ealing, London, where he

switched to copy editing. He moved to the Oxford Mail and then to the reputable part of Fleet Street – the Press Association, Britain and Ireland’s national news agency, where he became chief sub-editor. He now helps organise training schemes for national newspapers including the Daily Telegraph and Daily Mail.

God and the Coronavirus

Why Should I Suffer?

The Russians Have Invaded Before: The Battle of...