Top Posts
Knowing the One Who Always Keeps His Word
Pregnancy Resource Centers Fight For Life Amidst Opposition
This World is Not Our Home
Lessons Learned From a Gingerbread House
Let There Be Peace on Earth
‘I Wanna Dance’ movie: Whitney Houston’s success and...
Fact Finding, Sight Seeing, and Prayer Walking
Kidney donation led to 8 life-saving surgeries
The Power of Curiosity
When Love Came Down at Christmas
Home ANS Feature Former Billy Graham Crusade Director, Harvey Thomas, Passes Away 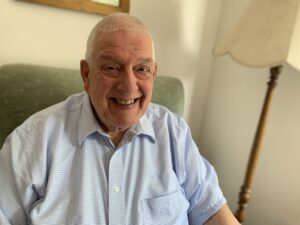 Harvey, 82, was Chairman of the Fellowship of European Broadcasters, Trustee of Trans World Radio UK and, along with his wife Marlies, Executive Director of African Enterprise UK.

He was also on the Council of The Cremation Society of Great Britain, Non-Executive Director of The London Cremation Company PLC and Trustee of the Chartered Institute of Journalists (CIOJ) Orphan Fund.

An avid train enthusiast, with a 33-engine-strong model railway built in his garage, Harvey was an outspoken Christian – preaching the Gospel around the world – and a wise, loyal and loving Husband, Daddy, Opa and Friend.

His wife, Marlies, and daughters Leah and Lani said: “Daddy taught us so much about what it means to live a life full of integrity, forgiveness, faith and love. His kindness and determination always to do what he felt was right left a lasting impact on all those he met. We grieve and miss him so deeply but heaven rejoices. A hero of the faith is Home.”

He is survived by his wife, Marlies, his daughters, Leah and Lani, son-in-law, David, and his grandchildren, Ellis and Esmae.

As a boy, Harvey attended Westminster School in London. He was articled in Law and studied at Northwestern College in Minnesota as well as the Universities of Minnesota and Hawaii.

From 1960-1975, Harvey produced Billy Graham’s rallies around the world before moving back to the United Kingdom.

From 1978-1991, he served as Consultant, Communications Director and Field Director for the Prime Minister, Margaret Thatcher, and the Conservative Party.

In 1990, Harvey was awarded a CBE for Services to the Prime Minister. Since then, he travelled the world teaching communication and PR. He was a regular television and radio commentator and ran various Presidential Campaigns.

Plant a Seed and Watch God Make It Grow