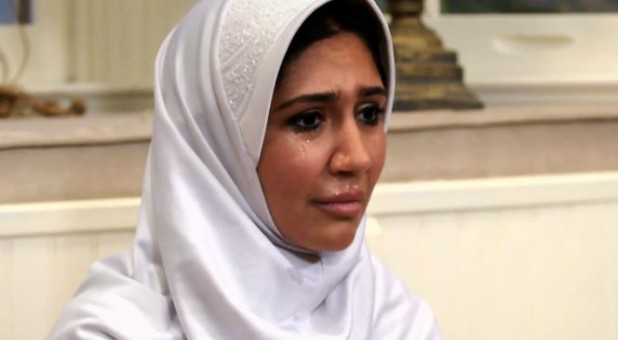 On the verge of a nervous breakdown, Fatima* cried out to God to reveal himself to her. Growing up in a strict Muslim home had led her to the point of extreme depression and anxiety. The story of A Former Muslim Woman Encounters God is really about what happened that night in Fatima’s life that would launch her on a journey towards a new life in Christ.

The following day she was determined to find the church she had seen in her dream. After asking around, she was overwhelmed when she eventually discovered it:

“It was exactly like I saw it in my dream. So, I just walked in and sat down. I didn’t know how to pray, so I opened the Old Testament and started to read. I felt a slight change in my life. But it wasn’t the change I needed.”

When her family discovered a photograph she had taken of the church, Fatima’s only option was to leave home.

“I was terrified when my family told me, ‘It is allowed for us to kill a deserter.’ But the Lord opened the door for me to stay at someone’s house where I could be safe.”

It was there that Fatima’s life was transformed thanks to help from the ministry of Leading The Way.

“One day I was watching the TV and I saw Dr Michael Youssef preaching. A number came up on the channel and so I called. Brother Noor picked up my phone call.

“I told him about my situation and he told me to meet him. We met at the church. He handed me a book called Finding the Joy You’ve Always Wanted by Dr Michael Youssef. This book was a shifting point for me.

“Brother Noor prayed with me and then he asked me, ‘Are you going to give your life to Jesus Christ?’ And I said ‘Yes.’ I really felt the presence of the Lord inside of me.”

You can watch a video of Fatima’s remarkable story here.

Countless Muslims like Fatima are finding new freedom in Christ through Leading The Way’s Biblical teaching programs and personal follow-up teams, who offer personal evangelism, discipleship, and ongoing support for listeners and viewers of their 24/7 Kingdom SAT broadcasts.

Many of Leading The Way’s field team staff are converts from Islam who have experienced persecution first hand.

These brave Christians are reaching the lost and equipping believers in the Middle East, North Africa, and most recently, Indonesia, the world’s largest Muslim nation.

Fatima concluded: “Every time I felt sad or I had a problem, I would receive a message from Leading The Way saying, ‘Don’t treat evil with evil, treat evil with good.’ I thank the ministry for helping me. They will be the reason a lot of people come to Christ. I used to be very scared of death but now I wish for it. I already booked a trip with the Lord. . . . Because now I know I have already gained eternal life.”

Now celebrating 30 years of ministry, Leading The Way‘s television and radio programs are broadcast in 26 languages to audiences across six continents. Leading The Way also produces DVDs, CDs, books, a monthly devotional magazine, and daily e-devotionals to spread the light of Christ. This Atlanta-based ministry utilizes field ministry teams to evangelize seekers, disciple new believers, and help the persecuted in places where it is dangerous to follow Christ. Dr Youssef’s unique perspective has given him a platform to speak boldly into today’s issues and provide Biblical solutions to the challenges Christians are facing today.

Breaking Generational Poverty with A Needle and Thread

Lawyers for Freedom: Mandatory Disclosure of Donors to...

Loving at all Costs in the Battle of...