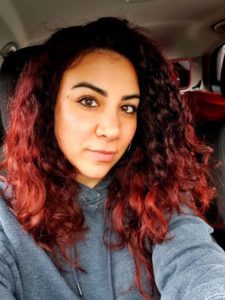 London, England (ANS) – Following a long search to find the missing puzzle in her life after experiencing depression follow a marriage break up, Dee got down on her knees in her living room in the South of England and asked God to reveal Himself to her and to come into her life.

Up to this point she had been praying to Allah, having grown up in a Muslim home but had found no comfort and no answers to what had been missing in her life.

But soon after praying that prayer of accepting Christ she knew she had found that missing part of her life when she started having powerful encounters with Jesus through dreams:

“In one of my dreams Jesus was wearing a royal blue robe and I couldn’t see his face because it was so bright. But his presence was so overwhelming that I felt such a peace and comfort,” remembers Dee.

“Each time Jesus would reveal to me specific scriptures.  At that point I’d never even picked up a Bible before. But straight after waking up from these dreams I would look up these verses and they would be so relevant to my situation.”

Six weeks later Dee walked into a local church where she experienced true family acceptance and love and was soon baptized.

Around this time, she also came across the teaching ministry of Leading The Way with Dr Michael Youssef on her car stereo:

“I used to think this guy is so passionate about the word of God. His sermons really blessed me because he speaks so much truth but not in a condemning way.  Because I grew up as a Muslim all I knew was condemnation.

“His teaching has given me such an understanding about living for Christ on a level that I wouldn’t have been able to capture myself reading the Word.”

Dee concluded by sharing her plans to live out her new-found faith through prison ministry:

“I’m planning, once the lock-down lifts, to work with a Prison Fellowship team. I have such a heart to reach the lost and broken, and the underdogs of society where people cast them aside, but they need the love of Jesus.”

Leading The Way UK’s Director Dr Alan Kerbey says many other former Muslims like Dee are finding help to grow in their Christian faith through the ministry of Dr Michael Youssef:

“It’s thrilling to hear more and more powerful stories from across the UK of people like Dee who are turning to Christ from Islam. It is a huge privilege to be part of a ministry like Leading The Way which is being used so wonderfully by God across the globe to lead the lost to faith in Christ, and to equip believers, like Dee, to become disciples. This is just one story which has come out of our Vision 2025 initiative which has as its aim to see at least one million souls won for Christ by 2025.”

Chasing the Wind is Foolishness