9/11 is a day forever marked by infamy, a horrific global reminder of terrorists’ coordinated attacks on America.

A medical doctor and global prayer leader remembers too vividly the painful day – not just because 9/11 is her birthday – but also due to the fact that she saw the devastation in New York City 11 months before the Twin Towers fell.

An ophthalmologist, Dr. Susan Rowe saw two towers explode into a pile of brick and steel rubble in an October 2000 vision of NYC and, the next month, put her words to the terrifying scene in a published article. 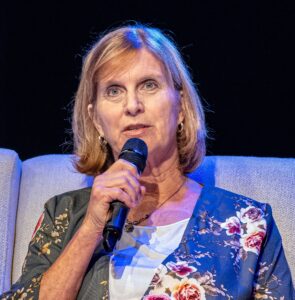 Dr. Susan Rowe, co-founder of the Global Watch and author of new book “Unleashed: Unlocking the Power of Corporate Prayer.”

“First of all, the 9/11 vision was life-changing for me,” Rowe said. “When 9/11 happened it was sort of like ‘what in the world?’ When I had the open vision I was really in desperate straits because a number of things were happening, one of which was my health being threatened,” Rowe told me.

After the vision, Rowe processed what she’d seen by writing about it. “The image completely took over my field of view as if I was there. I was set on the streets of New York and saw two giant towers explode into rubble. The debris was comprised of steel frames like a building that had collapsed.

“All of a sudden, a giant pair of hands came out of the sky. They scooped up the rubble and formed it in its hands. The hands opened. In them was a large clock tower. The clock tower was the image of Big Ben.”

When, almost a year later, Rowe saw images of rubble replayed on television, she knew her published vision (ATHALIAH AT THE GATES (elijahlist.com) 10 months earlier was from God. He then miraculously healed her of a debilitating, painful condition called Valley Fever.

Rowe, co-founder of the Global Watch with her husband Frederic who is also a doctor, said the vision of rubble, Big Ben and NYC, along with 9/11’s life-changing impact on her health confirmed again their call to prayer, which began when their youngest son was born in 1992.

“When the open vision happened, I was obviously in a lot of consternation but I also had a very busy medical practice. That vision was very disruptive, and I stayed in practice for about seven years. By the end of the seven years I was so divided because I knew the Lord had spoken to me about the vision,” said Rowe, who continued with Fred to serve their church as prayer directors, sensing the Lord had a bigger vision.

In 2015, during a small gathering of prayer leaders with global concerns in London, Susan spoke publicly about the vision for the first time. During that meeting, Big Ben ticked ahead seven seconds and the Roman numerals IXXI (9/11) reportedly appeared in the sky – confirming signs for all who attended to persevere in prayer and watching.

The Global Watch is sponsoring prayer for 21 days in September – coinciding with Jewish fall feasts and the 20-year mark of terrorist attacks on America – in interceding for the destiny of nations and, on 9/11, petitioning heaven on behalf of Islam. (https://www.theglobalwatch.com/prophetic-history.html)

The ministries are aligned for the event, “Until” and “Unto,” based on Isaiah 62:4-7 from September 6-27, which spans 9/11, Jewish holidays Rosh Hashanah to the Feast of Tabernacles, and publication of Rowe’s sixth book “Unleashed: Unlocking the Power of Corporate Prayer.”

The message of the book is a call to global, contending communities of prayer in the face of shaking and increasingly challenging days. Prophetically the book coincides with 9/11’s 20-year mark.

A “watchman” and intercessor, Rowe believes the Lord’s purpose for the book is to unleash corporate prayer within churches, which swelled after 9/11 and then backslid.

Interestingly, Google searches for prayer reached the highest recorded level in 2020, according to a report authored by researcher Jeanet Bentzen.

Part of the watchman call is to study the end times, and what Jesus is saying through world events, Rowe said. “9/11 was to me an obvious birth pang,” she added. Nehemiah 4:19-20 describes the watchman’s call to build walls of prayer.

A couple years ago, the Lord gave Rowe an opportunity to earn a master’s degree from Vanguard University. Another degree wasn’t on Rowes’ to-do list but, out of a desire to obey the Lord’s instruction, she began her studies.

In her second class, Rowe landed on a 2017 study titled “Silent and Solo” about the state of prayer in the American church by Barna Research. What she discovered in research over a three-year-period resulted in “Unleashed.”

“By and large, most people shy away from or they’re afraid of corporate prayer. Barna’s study revealed two percent of church-goers participate in corporate prayer,” said Rowe, who remains prayer directors with Fred at their southern California church. “That is what inspired this book.”

She believes many people pray, just not in many church settings. “If you look on your book shelves, you’ll see the content of prayer books is more about a personal walk with the Lord. How many books are written on corporate prayer? I’ve found maybe two or three,” Rowe said.

“’Unleashed’ addresses the need to return to the foundations of what Jesus talked about, His house of prayer, the corporate-prayer setting. And without it we are really not the Book of Acts church,” she added. 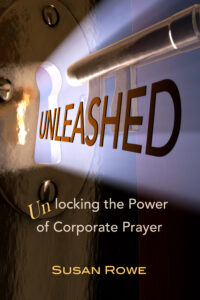 Contending prayer should be emphasized in churches and ministries including those within businesses, hospitals, schools and colleges. “It (prayer) needs to infiltrate our culture, but right now we’re too much on our own,” Rowe believes.

She points to what happened in her hometown of Bakersfield in 2015 when drought plagued California.

“We called people I knew along the West Coast to a meeting here in Bakersfield. There were about 200 people who showed up; forty of us who really stood to contend throughout the gathering, which included repentance, heartfelt prayer and worship,” Rowe said.

The Lord spoke to her heart before the gathering saying, “You will hear from heaven that I’ve heard these prayers.”

“I was taking articles out to my car and, lo and behold, I felt a raindrop on my cheek. I looked up and the skies were literally changing. Out of nowhere, this massive thunderstorm hit up and down the entire West Coast of the United States,” including the Mojave Desert – unheard of in July.

From people laboring and contending in prayer for rain in Southern California, The USA Watch was born.

The watches, which collaborate with IHOPKC and others on initiatives, span the United States, and include Native and Latin Americas, Israel, Europe, Africa, Asia, Australia, India, the Middle East and others.

“So we’ve been going to homicide sites every month and week, praying through these difficult areas. We’ve seen a drop in homicide rates of 30 percent when every place else in the nation is escalating,” Rowe said. 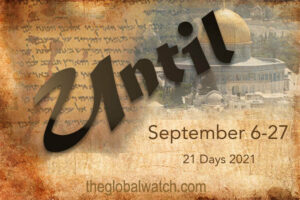 Almost in the middle of its 21 days of prayer during the month September – on 9/11 – The Global Watch is conducting a four-hour, private prayer initiative with representatives from the Middle East with a special focus on Islam.

Debbie Boone and the Boone Family