Top Posts
Knowing the One Who Always Keeps His Word
Pregnancy Resource Centers Fight For Life Amidst Opposition
This World is Not Our Home
Lessons Learned From a Gingerbread House
Let There Be Peace on Earth
‘I Wanna Dance’ movie: Whitney Houston’s success and...
Fact Finding, Sight Seeing, and Prayer Walking
Kidney donation led to 8 life-saving surgeries
The Power of Curiosity
When Love Came Down at Christmas
Home ANS Reports Gospel for Asia Provides New Home for Indian Widow 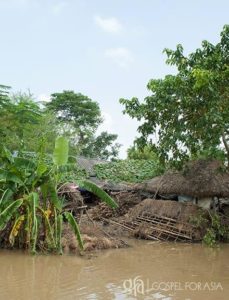 After Cyclone Phailin hit Bidya’s home, it was completely demolished, much like this home was destroyed by the cyclone in 2013.

According to GFA this disaster devastated the southeast region of India. Around 38 people lost their lives and it left another million people wondering about their future. Cyclone Phailin was the worst storm the people of this region had seen in 14 years, but its destruction left a pathway of God’s mercy behind as Gospel for Asia-supported Compassion Services teams ministered to the suffering.

Workers provided cyclone survivors with food rations, clothing, and cleaning supplies. They stayed behind for many months to help rebuild thousands of homes that were lost or greatly damaged. Together, they strived to bring relief to the victims of the disaster—people like the widow Bidya.

GFA says the villagers despised Bidya after her husband died. Impoverished and alone, she had to earn her living by working as a daily wage laborer. Because of her situation in life, no one would marry her daughter. They both toiled hard every day, finding whatever jobs they could to simply keep themselves alive. When Cyclone Phailin roared through their village, their bamboo house couldn’t withstand the high-speed winds. After it was destroyed, Bidya and her daughter were helpless. They had no means to build a new house for themselves. 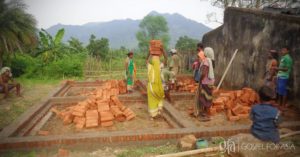 Surprisingly, when a Gospel for Asia-supported Compassion Services team surveyed their area, the entire community, even the leaders, requested that Bidya have her home rebuilt. The team went to work and built Bidya a more substantial home than she had in the beginning—a cement one.

Bidya was given this home after Cyclone Phailin ruined her bamboo house. She and her daughter are very poor and were unable to rebuild a home for themselves. But Gospel for Asia-supported Compassion Services built her a brand new one, this time one made of cement!

Villagers are Blessed by Gospel for Asia Compassion Services

When the villagers saw what the believers had done to help the poor widow, their minds began to change. Before, they strongly opposed Christians and were very unhappy when a church was built in their area. But now, they thought maybe Christians weren’t so bad after all. Maybe the God they worshiped really cared for the world, and maybe the church building in their village wasn’t the curse they once thought it to be.

Bidya and her daughter were so blessed by the new house. After her home was constructed, the villagers grew to respect Bidya, and her daughter has even received a marriage proposal. Bidya and her daughter also have grown curious about Jesus, and have attended special services at a local Gospel for Asia-supported pastor’s church. They are learning more about the compassionate God who provided them with shelter and a sense of worth.

GFA says God is using Compassion Services to extend hope to those who have endured much destruction and heartache. Just like Bidya was helped and the villagers were impacted through the love of Christ, many others in desperate need have observed the gentle and practical love our brothers and sisters pour out in Christ’s name to help alleviate their suffering.

*Names of people and places may have been changed for privacy and security reasons. Images are Gospel for Asia stock photos used for representation purposes and are not the actual person/location, unless otherwise noted.

Peaceably Gather – A Nationwide Call For Churches To Reopen