Top Posts
A Walk of Faith Begins with a Step...
God is Rich in Mercy
Everyone has a Story to Share
‘Till’ movie: Racial murder helped spark civil rights...
Leaning His Head On Jesus, This Evangelist Hears...
Timing, common ground, and fruitfulness in witness
Step Out of the Traffic
In Support of Ukraine
Living an Imperfect, Unfinished Life
‘Nothing is Impossible’ movie: Hoops, romance, second chances
Home ANS Feature Hindu Nationalists Disrupt Prayer Meeting at Pastor’s Home

From Christian Solidarity Worldwide (CSW) – a private prayer meeting at the home of a Christian pastor in India’s Tamil Nadu state was disrupted 21 March by rival political parties of Hindu nationalists. 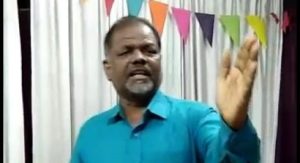 CSW reports the intrusion took place on 21 March at approximately 8:30 pm, as Pastor Godwin Abraham hosted a prayer meeting in his home to pray about the Covid-19 crisis and to discuss the pending temporary cancellation of his usual prayer meeting in order to comply with government orders to curb the spread of the virus. A nation-wide ‘Janata Curfew’ to combat the spread of the virus was imposed by the government and took effect from 22 March, the next day.

According to local sources, between 15 and 20 men had gained entry to the house located in Varadharajapuram Singanallur, Coimbatore, Tamil Nadu, and threatened to kill the Christians present. The attackers continued to harass and verbally abuse the women at the meeting, referring to them as prostitutes who visited local police stations to get favors from the police. Pastor Abraham reports that he was nearly physically assaulted, but another Christian intervened.

The police were alerted and arrived within 15 minutes to the scene of the incident. Both parties were taken to the local police station. However, the Christians were harshly criticized by the police for holding a prayer meeting and were told to get permission to carry out future prayer meetings. In India, there are no legal requirements for prior permission to conduct private prayer meetings in a home. After several local interventions, the police agreed to note the complaint by the Christians in their daily diary report, known as a Community Service Register (CSR).

Pastor Abraham told CSW: “My home has been used as a place for private prayer for the last 20 years. In all these years, we’ve never had any interruptions. I was shocked to see this happen in my own home. These Hindutva fanatics are so bent on shutting us up in every way and are willing to take extreme measures to even come into our private spaces to intimidate us with death. There is no room for reasoning or dialogue with them, which is really worrying. We are law-abiding citizens and want to ensure that everyone is safe during these trying times and must have the opportunity to put in place measures that will ensure that the freedom to worship and pray continues without endangering anyone. I am concerned that even as the country goes into lockdown and police resources are used to keep law and order, groups such as these will take advantage of this situation to intimidate, harass and threaten religious minorities to submit to their will.”

CSW’s Chief Executive Mervyn Thomas said: “CSW remains deeply concerned by the impunity with which non-state actors harass, intimidate and attack Christians across India. We call on the police to step-up their measures to monitor and control such abuses against religious minorities even as the country deals with combating the spread of the coronavirus, and urge the authorities to conduct a detailed investigation into the attack on Pastor Abraham’s home.”