Top Posts
Colorado football coach Sanders’ unabashed faith
There’s A Light That Enters Houses With No...
Knowing the One Who Always Keeps His Word
Pregnancy Resource Centers Fight For Life Amidst Opposition
This World is Not Our Home
Lessons Learned From a Gingerbread House
Let There Be Peace on Earth
‘I Wanna Dance’ movie: Whitney Houston’s success and...
Fact Finding, Sight Seeing, and Prayer Walking
Kidney donation led to 8 life-saving surgeries
Home ANS Feature Making Peace in Russia and Ukraine 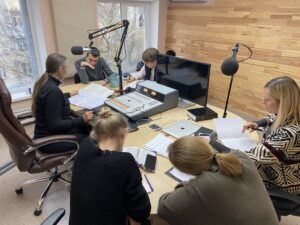 New Life Radio’s small staff beam the gospel into regions where public evangelism is not allowed.

In the midst of the ongoing buildup of Russian troops in Belarus and border areas with Ukraine, we look at the role of Christianity in these two very Orthodox nations.  From the Ukrainian Black Sea port of Odesa where Russian is predominantly spoken shines a light of the gospel of hope and peace for all Russian-speaking people.

New Life Radio, now broadcasting from Odesa, sees part of its role to the Christian community in both Ukraine and Russia to call for peace and calm.

Dr. Daniel Johnson from NLR shared, “We all need to trust in God’s sovereign control over this political situation.  Things eventually will calm down and become stable, (IF Putin backs off).”

“We at NLR pray that this crisis would go away and that Russia and Ukraine–that are as close as two people groups can be–would reconcile and allow each other to develop independently and peacefully,” Daniel shared.  “We desire to be ‘GUIDED BY CHRISTIAN PRINCIPLES,’ as the leadership of Russia claims he is most concerned about.  Putin has close ties with the Russian Orthodox Church and claims his nation’s moral leadership in the world based on this relationship with the Orthodox.”

“In reality, we need Christians in America to continue praying and supporting evangelism efforts targeting each country, investing in ministries that teach the Bible, and help the church in discipleship.  Since Russia is basically CLOSED OFF to public evangelism, Bible distribution, and missionary work, it is important to invest in ministries that are able to evangelize on a nationwide scale, despite these restrictions, and that is one role Christian radio can play.  So please pray for New Life Radio, which is a mission effort of a small group of Christians in America and a tiny missionary team in Odesa that reaches Russian speakers for Christ globally.

And pray for the leadership of the US, that they might consider a Christian position as a peacemaker, rather than a facilitator of political strife, which is what happens when they make the wrong moves or say the wrong things to the wrong people.  God is in control and ultimately we are not worried about this crisis, even if we have to relocate our radio station to another country (again).”