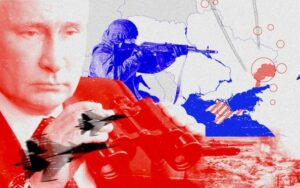 Q.  Daniel, what is New Life Radio, and does the Russian government allow you to exist?

“Well, New Life Radio is unique because we introduced domestic Christian radio to Russia and Ukraine on FM, satellite, and the Internet.  We also provide programming for the entire former Soviet Union.   The need is so great.  After 30 years of quasi-religious freedom in Russia, 99% of the communities have no local evangelical Christian radio station.  Actually, it is the Lord who makes it possible for us to exist!

“Today there are only a few broadcast radio operations, mainly Orthodox and Catholic. We use satellite and internet both, getting us into cities and rural regions.  Should Russia shut off its internet, NLR can still serve the nation.  However, thanks to Vladimir Putin, New Life Radio relocated to Odesa and is now beyond his control…except of course…”

Q.  Can you tell us about the potential Russian invasion?

“Yes, it is real.  Ask the Ukrainians who live in Crimea what they think.  Putin forcibly took it over in 2014,  His forces continue to fight in the Donbas.  If he can do it once, he can do it again, even if the West thinks otherwise.  It’s all up to his political calculations which no one at present understands completely.  He has the forces to do it.  NATO does not have the obligation nor the willpower to fight for Ukraine.

“Should Putin decide that Russia can handle more western sanctions, (remember, he has new economic agreements with China for oil, gas, and materials), he may decide it’s worth it.  His dream is a reunited Russia/Ukraine.  This would be part of his legacy.  But, his retired military generals are now telling him to forget the idea.  His state department claims they will not invade, and for those who are not caught up in Putin’s personal kleptocratic orbit, sensible heads in Russia may prevail.

“Remember, Putin has total power in Russia, and he is beyond political control and opposition.  He is like a Czar and does whatever he pleases.  His diatribe last night with France’s Macron, hinting, ‘does NATO want a war with Russia over Crimea?‘ shows his instability and threat potential.  With a weak US administration, it is the best time for him to be adventurous.”

Q.  “Daniel, what about the Ukraine government stating we should all calm down?”

A.  “Their president Zelenski is an unenviable position.  He wants and needs to maintain their security AND their economy.  They are already the poorest country in Europe.  He tries to calm people down as a way of promoting stability and a climate of investment.

“And he is somewhat right to take Russia at their word that they will not invade.  However, if you look at the number of citizens joining private militia groups, the public may not be as calm as Zelenski. Unlike 2014, they are ready to fight. He is right to ask for calm, but he has no clue what Putin will do.  They do not meet together.  Putin does not negotiate with Ukraine as he does not recognize Zelenski as a legitimate leader. ”

“Thank you Daniel for your insight and for your fantastic ministry of sharing the gospel!”