Top Posts
Knowing the One Who Always Keeps His Word
Pregnancy Resource Centers Fight For Life Amidst Opposition
This World is Not Our Home
Lessons Learned From a Gingerbread House
Let There Be Peace on Earth
‘I Wanna Dance’ movie: Whitney Houston’s success and...
Fact Finding, Sight Seeing, and Prayer Walking
Kidney donation led to 8 life-saving surgeries
The Power of Curiosity
When Love Came Down at Christmas
Home World MissionsPersecution Indian Christians Beaten and Bibles Burned at Prayer Gathering

TAMIL NADU, INDIA (ANS) — A prayer meeting in a home in India’s Tamil Nadu state was disrupted on March 19 by approximately 15 people from the Hindu Munani (Hindu Front) and the Vishva Hindu Parishad (VHP), which is the religious arm of the RSS, a Hindu nationalist movement.

Christian Solidarity Worldwide reports the prayer meeting was being held in the home of a Christian student named Siddappa, who lives in Kurubatti in the city of Hosur. Neethiraj of the India Evangelical Mission had visited the home of the student on March 19 to pray along with  a friend named Chandrakant and his sick 16-year-old relative. 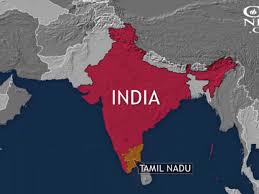 Map of Tamil Nadu in India

CSW says that soon after the prayer meeting began, the intruders went upstairs and questioned the men about their purpose for gathering. The Christians were manhandled and dragged down the stairs and taken to the middle of the street outside Siddappa’s home.

Neethiraj’s bag which contained Christian tracts was forcefully emptied on the street. The attackers also gathered all the Bibles and hymn books from Siddapa’s home. Local sources say that Neethiraj was forced to set the items on fire with petrol, which the perpetrators had extracted from a nearby vehicle, despite pleas from the Christians not to set the Bibles on fire.

Nehemiah Christie, Director of Legislation & Regulations of the Synod of Pentecostal Churches in Tamil Nadu, said: “Any Christian gatherings are now at risk of being interrupted by Hindutva forces. It is worrying to see that such groups freely intrude homes, question one’s belief and seize articles of worship, including Bibles,and desecrate them.

“The Hindutva ideology of intolerance and impunity is spreading in this state, inciting people to harass and attack religious minorities, who just want to be able to practice their religion or belief peacefully. Such culture is not healthy for the future generation of Indians who are having to witness these awful acts. The Indian government cannot allow this divisive ideology to tarnish India’s identity as a historically peace loving nation. They must act now.”

CSW’s Chief Executive Mervyn Thomas said: “We are deeply concerned that religious minorities who are simply exercising their right to practice their religions or beliefs are being harassed and targeted by non-state actors with impunity. We urge the government of India to prosecute those involved in targeting religious minorities, and implement measures to encourage the co-existence of all religions in India.”

** Editor’s Note: Many people in this region of India do not go by surnames, hence only first names are given.