Top Posts
Colorado football coach Sanders’ unabashed faith
There’s A Light That Enters Houses With No...
Knowing the One Who Always Keeps His Word
Pregnancy Resource Centers Fight For Life Amidst Opposition
This World is Not Our Home
Lessons Learned From a Gingerbread House
Let There Be Peace on Earth
‘I Wanna Dance’ movie: Whitney Houston’s success and...
Fact Finding, Sight Seeing, and Prayer Walking
Kidney donation led to 8 life-saving surgeries
Home ANS Feature India’s 1.2 Billion On Lock Down

Wills Point, Texas (ANS) – The world’s biggest coronavirus lockdown has been extended — leaving more than a billion people in India on the edge of survival amid fears of mass starvation, according to mission agency Gospel for Asia (GFA World, www.gfa.org). 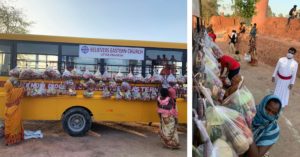 Last week Prime Minister Narendra Modi extended the strict nationwide lockdown until May 3, essentially placing India’s 1.3 billion people — one out of every six people in the world — under stay-at-home orders. The latest order means the entire nation — soon to overtake China as the world’s most populous — faces a  six-week shutdown in total.

GFA World reports that the lockdown, which began March 24, bans all non-essential activities and has brought the economies of several southeast Asia nations to a grinding halt, instantly plunging hundreds of millions of families into fear and chaos.

At the grassroots level, millions of furloughed day laborers and agricultural workers — the backbone of the workforce — face the grim threat of starvation.

According to GFA World in southeast Asia, hundreds of millions of children are especially at risk, as the lockdown paralyzes entire nations. Huge numbers of street children — estimated at 70,000-plus in Delhi, India, alone — have no one to beg from and no one to turn to.

“When a crisis hits, the children are always hit the hardest,” said Yohannan, whose Texas-based organization directly supports and feeds more than 70,000 children in southeast Asia. “Right now, we’re working alongside the government in India to do all we can to bring relief to the most needy.”

Immediate relief includes “food-to-go” bags, like those distributed by church workers in a community where the local brick factory has shut down, putting everyone out of work.

In one community, teams have been working with local authorities to feed 500 people a day, and elsewhere teams have been taking food to people living in the open, who’ve been reduced to begging.

“Unlike many in the West, the poor in southeast Asia do not have a social safety net or stimulus checks to fall back on,” said Yohannan.

‘You Were Sent By God’

On April 13, as church workers distributed food to out-of-work day laborers facing starvation, a widow called Majili told them: “I’ve been suffering from a headache for a week. There was no one to help me, and I was crying inside. You were sent by God.”

Sadhna, one of thousands of people helped by the food distributions, was grateful that workers taught her community about social distancing and hand-washing with soap to prevent the transmission of coronavirus and other diseases–simple practices she’d never heard about.

Shutdowns have crippled manufacturing industries and pummeled stock markets, leading to fears of a potential economic train wreck that could have a ripple effect on the U.S. economy.

Meanwhile, reports of coronavirus-related violence in India are on the rise as fearful residents target individuals they blame for the spread of the virus.

Many organizations like GFA World are working with grassroots networks, including churches, to help stop rumors and misinformation from spreading and to combat stigma.

“As followers of Christ, we need not be afraid because we have a living hope,” Yohannan said. “In times of crisis, it is the body of Christ, the holy church, that rises to the challenge for the sake of others because of the love of Christ.”

You can watch a GNA interview with KP Yohannan here.

For more details on what GFA World is doing in this crisis go to: www.gfa.org/press/covid-19.