Top Posts
Knowing the One Who Always Keeps His Word
Pregnancy Resource Centers Fight For Life Amidst Opposition
This World is Not Our Home
Lessons Learned From a Gingerbread House
Let There Be Peace on Earth
‘I Wanna Dance’ movie: Whitney Houston’s success and...
Fact Finding, Sight Seeing, and Prayer Walking
Kidney donation led to 8 life-saving surgeries
The Power of Curiosity
When Love Came Down at Christmas
Home ANS Feature Indonesia: Church carried a mile, swallowed up after ground liquified

Indonesia: Church carried a mile, swallowed up after ground liquified

The powerful 7.5-magnitude earthquake that struck Indonesia set off a rare seismic process called liquefaction that 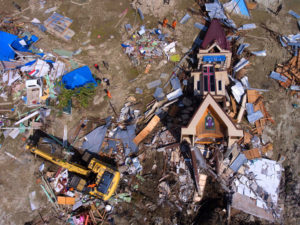 The camp was held at Gereja GPID Patmos Church in Jono Oge, located about six miles south of Palu. Every year as many as 100 children gather for an annual catechism organized by the Protestant community in Palu. This year they chose the small village of Jone Oge for the Bible camp.

Dozens of children were trapped on the ground floor. The catastrophe worsened when the seismic movement caused liquefaction of the soil and the entire area was transformed into a sea of ​​mud.

When the quake struck, some students were sharing dinner in the auditorium. “The building fell on top of most,” Lidya Mauren, 27, told Minuto Mercedes. His 17-year-old sister perished in the calamity.

“The land began moving, and it was like the church was swallowed up,” Douglas Simamora, 16, told the Wall Street Journal (WSJ).

Simamora, one of the few survivors, was playing soccer on a break from the Bible camp outside the Jono Oge Protestant Church. As the quake intensified, the solid ground beneath his feet began to liquefy.

He and his friends ran to a grouping of trees where the ground seemed solid, while buildings and homes slipped past and disappeared. They watched as the narrow A-frame Protestant church was carried away.

Then their tiny island dislodged and began floating amidst the river of muddy debris. “I told God, if this is the end, I am ready to die.”

His island floated along like Noah’s Ark, coming to rest a mile away from where the church once stood.

The church also floated for a mile and came to rest face up, with most of the structure broken apart or swallowed beneath the surface.